Sometimes, the city in which a movie is set plays a role more important than that of the main characters and, over the years, many filmmakers have been drawn to the crusty liveliness of New York. Here are a few films where, even when cast alongside screen legends like Audrey Hepburn, Robert Redford and Marlon Brando, New York was the star.

The Best of Everything is the story of three women professional women with complicated private lives who all work at a Manhattan publishing firm and share a tiny apartment. Based on the novel of the same name by Rona Jaffe (which was, incidentally, required reading for the women in the cast of Mad Men), The Best of Everything wasn’t actually filmed in the city but it is, nonetheless, the quintessential story of women in mid-century NYC: a film at once glossy, glamorous and scandalously gritty for 1959. It’s a soap opera— make no mistake— but with Joan Crawford at the helm and acting her ass off, it’s a sudsy mess worth seeing.

Breakfast at Tiffany’s is perhaps best known for its lovely star—Audrey Hepburn—and the notoriously racist depiction of her Asian landlord. And it’s that same tension between beauty and nastiness that forms the core of the film. Tiffany’s is a dirty, sad story polished over with an intoxicating pallet of purples and yellows and bright pinks and bright lights. The movie takes monumental liberties with Capote’s masterpiece of a novella, but what the film does, it does impeccably well. Through its portrayal of the melancholy high-class call-girl Holly Golightly and her nameless cat, Breakfast at Tiffany’s captures the haunting restlessness that both powers the city and drives people to it.

The tried and true plot twist of a free-spirited woman marrying stodgy man gets an update in this peek into the lives of a young couple living in Greenwich Village. For one thing, the stodgy man is played by Robert Redford at his height. Swoon! Charles Boyer lives in the apartment upstairs, which is only accessible by a window in Redford and Jane Fonda’s home. Obviously, hi-jinx ensue and Redford winds up drunk, flitting barefoot through Washington Square Park to prove to his wife that he possesses a streak of bohemian joie de vivre.

The New York of Francis Ford Coppola’s classic isn’t exactly inviting. The Godfather’s portrayal of mob politics in the city that never sleeps is, in equal parts, visually stunning and morally gruesome. But, if you look beyond the bloodbath, you’ll get an interesting view of the city—the flagship store of Best & Company on Fifth Ave., the side entrance of Bellevue Hospital, Old St. Patrick’s on Mulberry, the New York Eye and Ear Infirmary on 14th.  The Godfather offers a unique portrait of everyday New York, an impossibly glamorous city with a terribly dark side.

Roger Ebert once described Annie Hall as “just about everyone’s favorite Woody Allen movie.” Rightfully so. The film is about a zany, neurotic comedian attempting to maintain a relationship with a seemingly scatty, albeit exuberant woman over the course of several years. Like The Godfather, Annie Hall gives us a street-view of New York, taking us to Steve’s Famous Clam Bar, Beekman Cinema, Bethesda Fountain and Astroland Park. However, here—rather than glossy and deadly—New York comes off as lively and buoyantly fast-paced, a town where one is guaranteed good conversation, great clams and a fair share of neurosis. 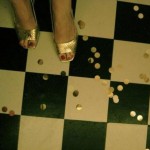