Before we get started, I need to point this out to you. Bond, for me, is Dr. No-Die Another Day. Daniel Craig does not exist. We won’t get into the debates here, because I’m trying to focus on the good, not the bad. So I won’t be mentioning how Pee Wee Herman would make a better Bond, or how they ruined one of my favorite franchises. Just know this as you read on.

License to Kill came out the year I was born, you do the math, and six long years later, came Goldeneye. Not only a great movie, but those of you who were around to play the video have those memories as well. It wasn’t until Die Another Day came along, I was able to go see Bond in the theater. It was my 13th birthday party. Halle Berry came up out of the water (à la Ursula Andress), in that orange bikini. This was the first time I’d gotten to see a Bond picture straight through. Naughty scenes and all. No VCRs here.

We had You Only Live Twice, On Her Majesty’s Secret Service, and all of the Pierce films on tape, as well as Thunderball and Diamonds Are Forever copied from TV. I was always watching the films whenever they were on television.

Everyone has memories similar to these, no matter which Bond you grew up with. We can all probably recall the first Bond we saw, and we all have our favorites. My friends and I always inevitably debate this every time we go to the local watering hole. Unfortunately, the drinks are stirred, not shaken.

So this article will be looking at the good traits of all the Bonds. Yes, even Lazenby.

The original Bond. Tough, cool, classy. Never wore a safari suit. Connery’s Bond was the strong, silent type. His films are the closest to Ian Fleming’s books, in both story and time. They also established what would forever, or at least until 2002, be the rules of Bond. Some of these were pre-established in the books, others created for the movies. The coolest Bond.

His only Bond film, On Her Majesty’s Secret Service, is important in the Bond story, as it deals with his only marriage, and the death of his bride. Lazenby the man was kind of a jerk back then, but he’s a lot nicer now. Check out his interviews. His Bond character, however, never really got the opportunity to develop into anything interesting. He will always be the Bond that wore a kilt, which is odd really, because Sean is the Scottish one. Lazenby’s Bond was certainly the most cocky. Sort of unlikeably so, but then again, you feel very sorry for him by the end of the picture, when he loses his wife.

After a one-picture-return by Sir Sean, we get Roger Moore. The Bond of the 1970s. Moore’s Bond was certainly the most fun Bond, and is often described as, “campy.” The Adam West of Bonds? His eyebrow constantly raised, a one-liner always ready, and the fastest bedding of women this side of the…ever. Say what you will, but he played Bond the most (officially), and kept things light-hearted, as they should be in adventure stories. The most fun Bond.

Dalton played Bond in two films in the latter half of the 1980s. Dalton’s Bond was much darker than the previous incarnations, but not too dark, Mr. Craig. Sorry. Dalton definitely looked the part of Bond, and played the character in a sort of mix of Connery and Moore. He’s not above strangling somebody quite violently, but making a good joke about it at the same time. The darkest Bond.

Brosnan’s Bond was a pretty well rounded version. He got the closest to the emotional side of Bond I’d ever want to see, for what is essentially a comic book character. We get to see what makes him tick, but not enough that it bugs us. You have the coolness of Sean, the humor of Roger, and the emotional detail of Lazenby and Dalton. The most well-rounded Bond.

Just in case you’re curious, do I have a favorite Bond? No. If I’m in the mood for a particular type of Bond experience, I know which film, or at least person, to go to.

So now comes the real challenge. Out of 20 Bond films, what are the best? One rule I’ve found works is always go with the gold. Any Bond film with a title involving, “gold,” is, well…gold (Note-this is a coincidence. My film rating system is not based on color). So here are, the top Bond Films in my opinion.

If you show a Bond film to someone who’s never seen 007 (shame!) then show them this film. While it’s the third film in the series, it really brought in a lot of elements that stayed around for the Bond films to come. Bond’s association with Aston Martin cars, his three piece grey suit, and Shirley Eaton painted in gold are all 007 icons most of us think about when we think of classic James Bond.

Pierce Brosnan’s first Bond adventure. Plenty of action, great set pieces, humor, and some insight into Bond’s character, plus a lady that squeezes people to death with her thighs. You can’t go wrong here.

Roger Moore teams up with a KGB agent (Barbara Bach) to track down some missing nuclear submarines. In this adventure we get a great theme song, beautiful sets, and the introduction of the great Bond villain, Jaws (No, not the shark).

5. The Man With the Golden Gun

Bond becomes the target of an infamous assassin (with three nipples), played by Dracula himself, Christopher Lee. Remember Tattoo from Fantasy Island? Hervé Villechaize plays an evil version of the same character as Nick Nack, the villain’s assistant. Britt Ekland in a bikini? Yep yep.

This would have made a great film even as something other than Bond, as it deals with a corrupt media mogul. There are some pretty nasty bad guys in this one, and the coolest motorcycle scene since The Great Escape. Teri Hatcher isn’t in a bikini, but stockings work.

7. From Russia with Love

Those of you die-hard Bond fans will know Q the gadget man actually made his first appearance in Dr. No, though he was played by a different actor and called “Major Boothroyd.” The actor we all know as Q (Desmond Llewelyn) makes his first appearance in this film. A pair of gypsy girls fighting, an old cow with a knife in her boot, and a great boat chase make this a good Bond film. Sorry, no bikinis.

Timothy Dalton’s first Bond film finds him stopping world war three from happening, and trekking around the globe to do so. This film has a great opening sequence and plenty of action and fun. I bet you’ve never seen anybody ride down a mountain on a cello case, have you? Again, sadly no bikinis.

Roger Moore’s first Bond film. This film features a great theme song by Paul McCartney and Wings, a show-stopping boat chase, the evil Baron Samedi, and a guy who explodes. No, really! Remember Jane Seymour (Dr. Quinn: Medicine Woman)? She’s the Bond girl in this one. We got some bikni.

Which are your top-10 James Bond movies? 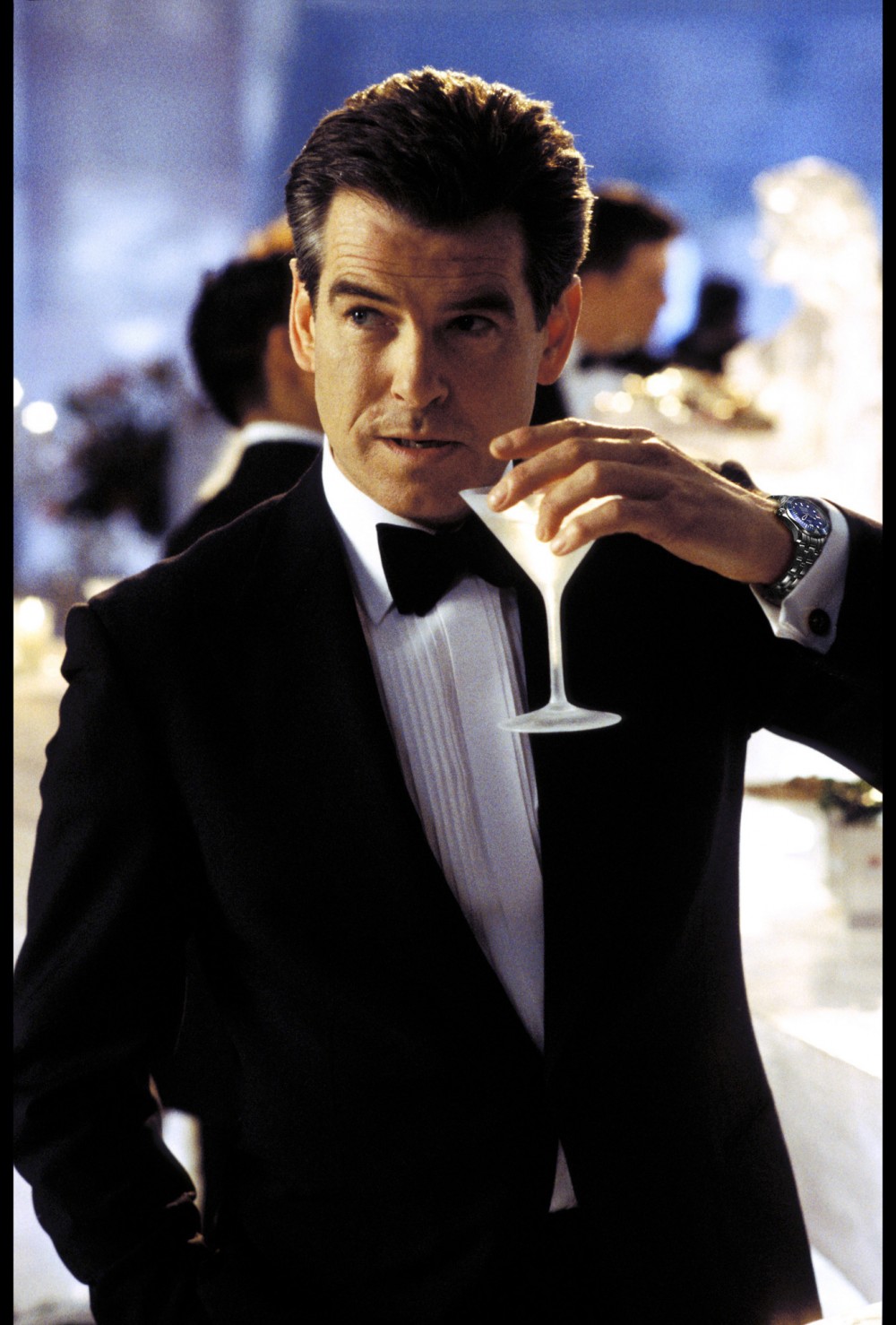 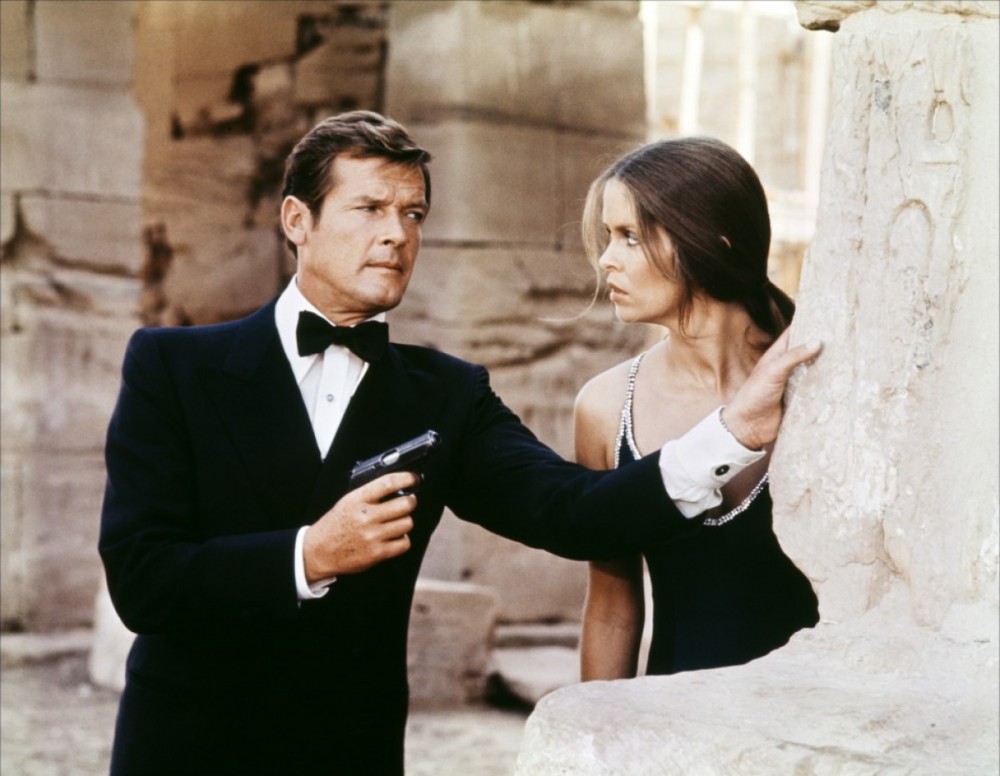 Above: Roger Moore in The Spy Who Loved Me 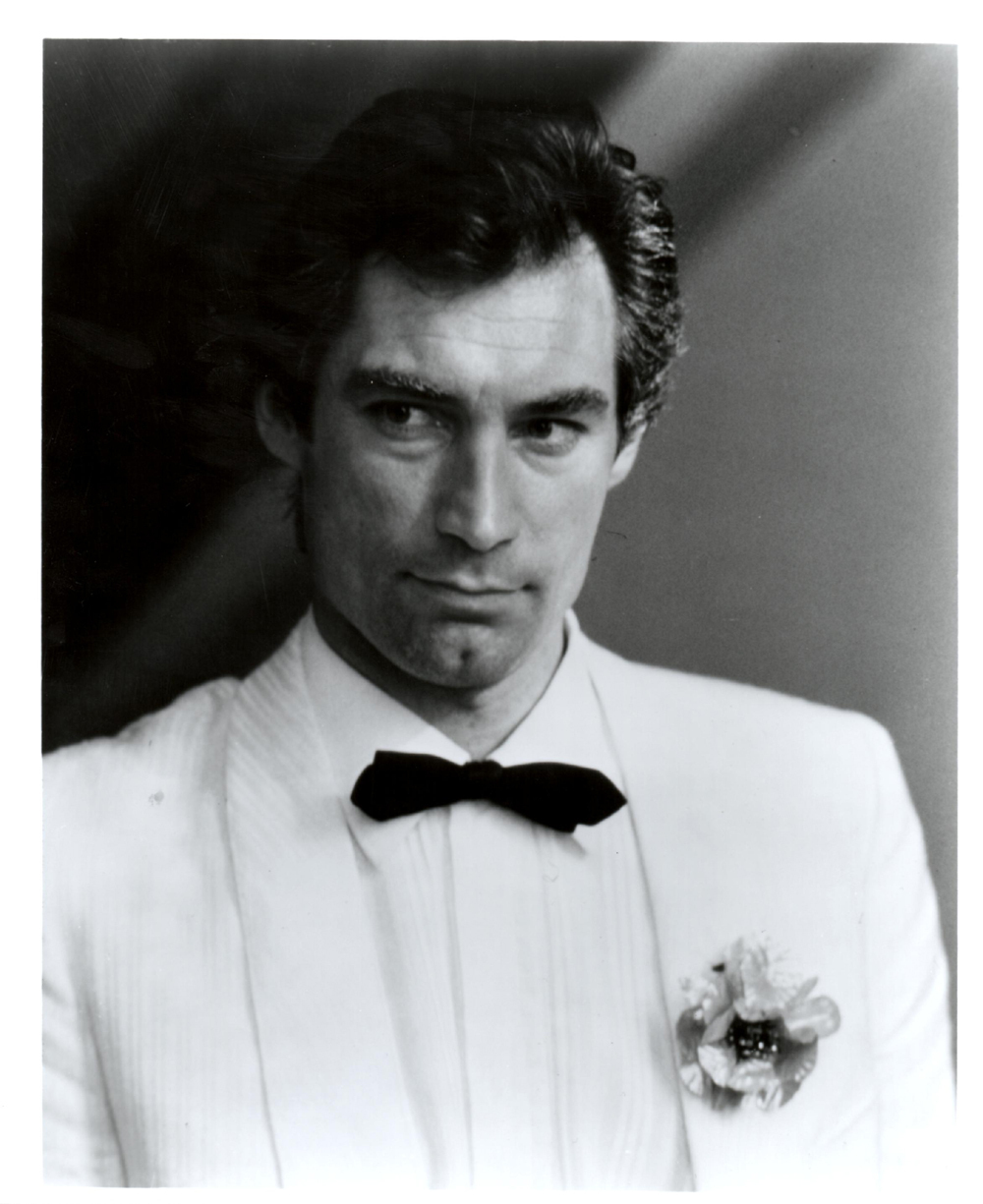 Above: Timothy Dalton as 007 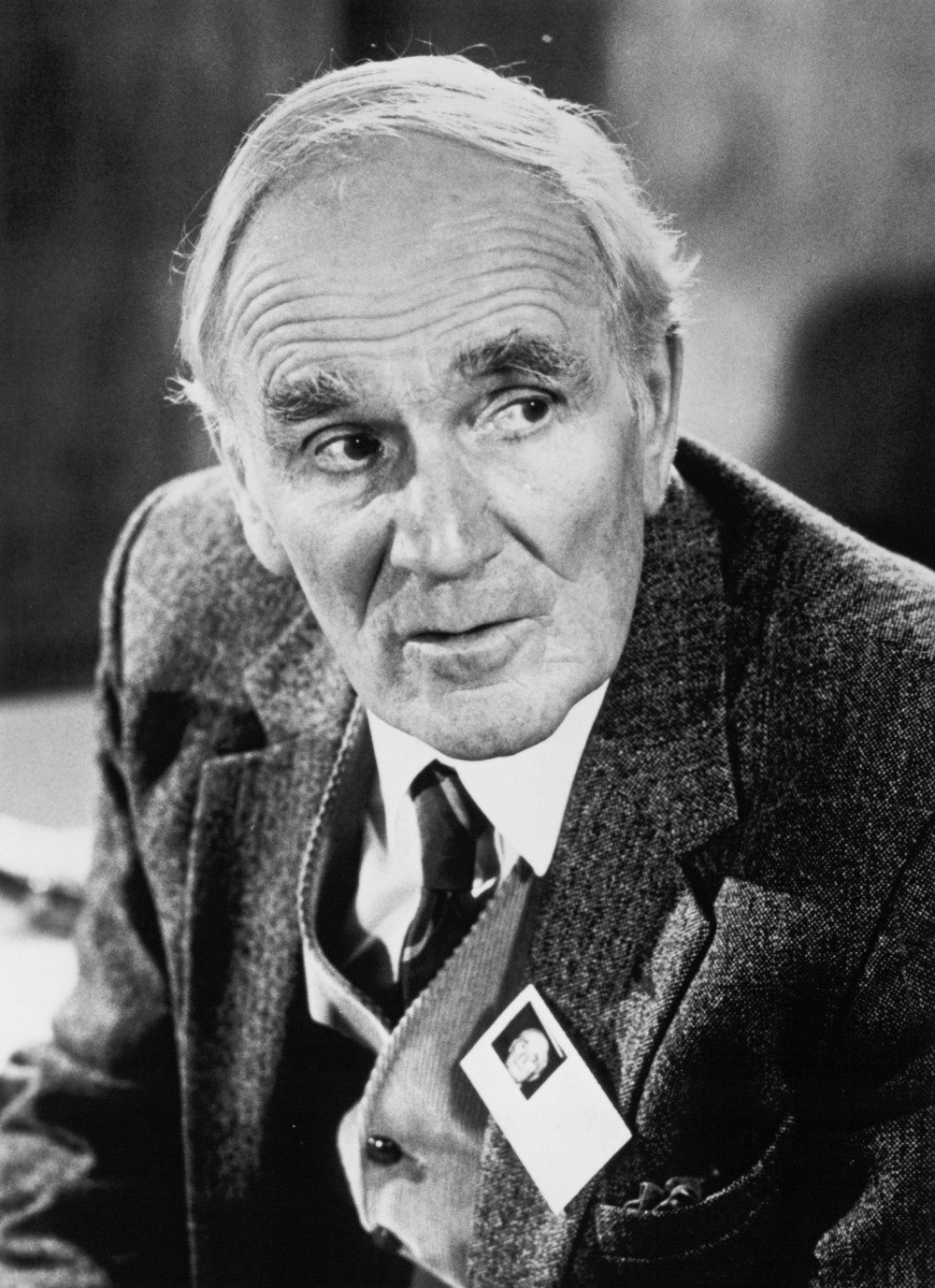 Above: Desmond Llewelyn as the eccentric Q 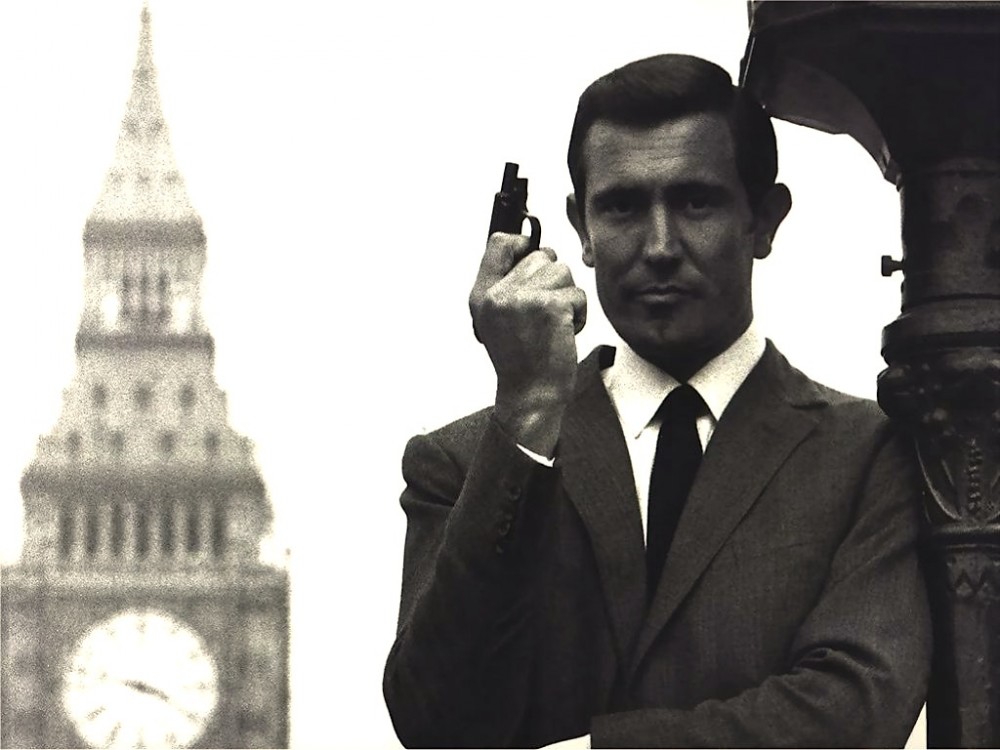 Above: George Lazenby as 007 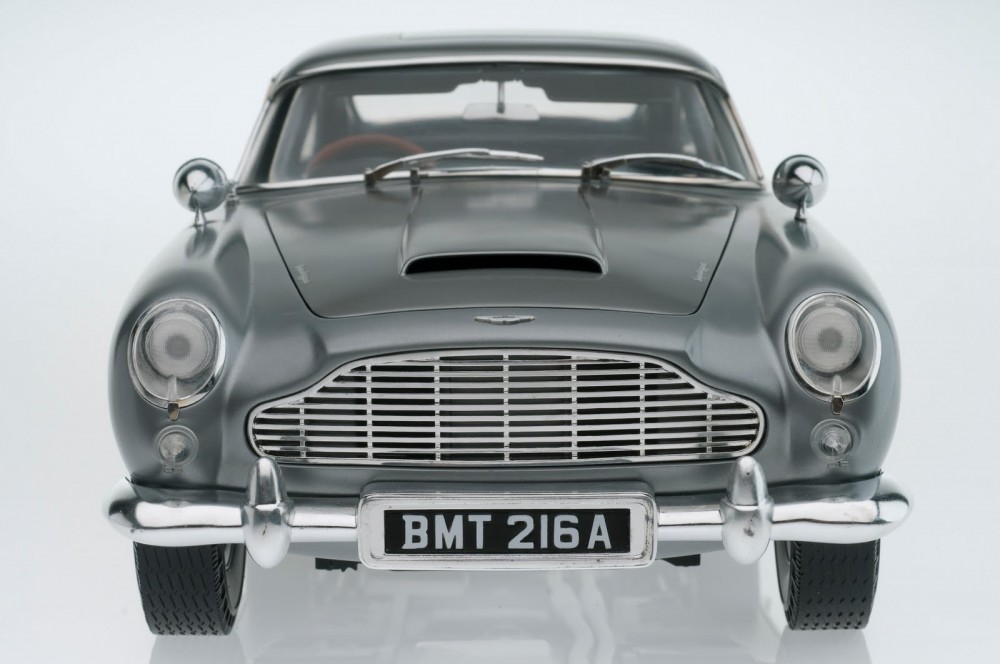 Above: Aston Martin DB4 – The Most Famous James Bond Car 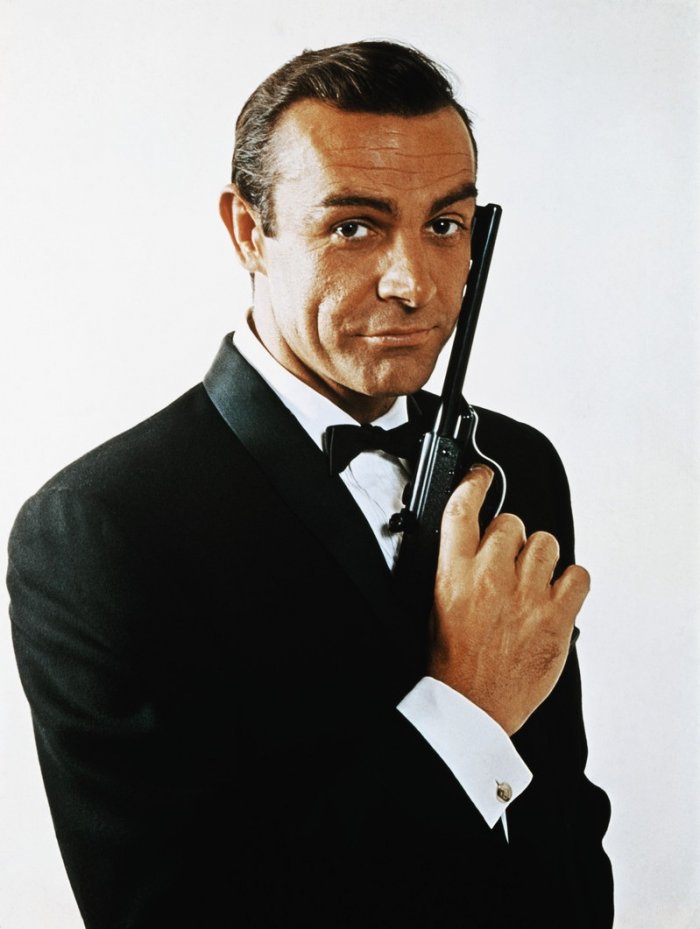