Lounge Revivalists dream of romantic mystery. It’s why we buy all those Exotica and Space Age Pop records. We dream of idyllic unexplored islands or far-flung planets away from problematic modern lives. It doesn’t matter that those places couldn’t possibly exist. We need them to exist. And, with a dream and a good stereo, we hope to will them into existence.

Korla Pandit was the personification of romantic mystery. Each day on his TV show in the 1950s, his beatific face peered wordlessly into the camera and he transported the American public to those mysterious worlds playing a Hammond organ.

Known as “The Godfather of Exotica”, Pandit was a musical child prodigy born in New Delhi, India to a Brahmin priest and a French opera singer. He made his way to America by way of England, where he was educated. Or so the story went. Like the fantasy worlds we Lounge Revivalists visit with our stereos, Korla Pandit didn’t bear up to close scrutiny.

Ostensibly, he was Hindu. Yet Hindus don’t wear turbans. And while Sikhs do wear turbans, they don’t adorn them with jewels. Nor are Sikh men clean-shaven. Even the phrase of “Eastern mysticism” that opened Pandit’s TV show was actually a quote from the Bible (Proverbs 8:11).

In reality, “Korla Pandit” was an invention ‚Äî or, rather, a personal reinvention ‚Äî of John Roland Redd, a Black jazz musician born in St. Louis, Missouri. Redd’s transformation from light-skinned African-American to Indian musical mystic was largely one of self-preservation. At first, he went from being John Roland to “Juan Rolando” simply because Latino artists were allowed to join the whites-only musicians union and thereby take better paying gigs. After marrying his wife, Disney animator Beryl DeBeeson, the two went a step further and created the more exotic Korla Pandit.

In a largely homogenous 1950s America, his uniqueness, bolstered by a public unfamiliar with India yet enamored with its romantic mystical appeal, gave Korla Pandit opportunities John Redd never would have had — a daily TV series and record deals, a social circle that included Errol Flynn and Bob Hope, and a largely undisturbed family life in the Hollywood hills with his white wife and mixed-race children. It was a secret that served Pandit well. He passed away in 1998 without anyone revealing his true identity to the public.

Even if the secret had been revealed, it probably wouldn’t have changed anything. “Korla Pandit” was more than a stage persona. Rather than hiding something, it revealed it: There was truth inside the ersatz exoticism and mysticism. Pandit was the son of clergy — a Baptist minister. His mother was of French Creole descent. And the teachings of his friend, Self-Realization Fellowship founder Paramahansa Yogananda, undoubtedly had considerable influence on Pandit’s view of religion and spirituality. More importantly, Pandit truly believed in the power of music and had the talent to support that belief. Simply, “Korla Pandit” was truer to the nature of John Redd than John Redd ever was.

Exploring this fascinating story in-depth is Korla, a documentary by director John Turner. Along with the film’s co-writer Eric Christensen, Turner grew up watching Korla Pandit’s Adventures In Music on TV. Both worked for 35 years at KGO-TV in San Francisco where Pandit had a live show in 1964. After Los Angeles Magazine revealed Pandit as an American in 2001, the two became ardent fans.

Korla, as a film, is standard documentary fare; It hews to the usual format of a mostly linear timeline supported by voiceovers, archival film and photos, and interviews. And that’s as it should be: Pandit’s story is best told when it is allowed to unfold naturally without interference from artificial structures imposed by film makers.

Watching the movie, you get the feeling that the film makers were making up for someone else’s lost opportunity. With the exception of clips with one of Pandit’s cousins and Carlos Santana (yes, that Carlos Santana), the supporting interviews are largely from journalists, academics, and fans. And this was simply because those who could tell the story best –Pandit, his wife Beryl, and even his first born son, Shari– had already passed away before the documentary was even an idea.

Despite all this, the film works. Pandit’s story is fascinating. The archival music clips put Pandit’s talent on full display. And the interviewees are charmingly positive in their admiration for him. Lounge Revivalists who enjoyed Don McGlynn’s documentary Louis Prima: The Wildest will certainly enjoy Turner’s Korla. It’s not yet available on home video. So if a showing comes to a theater in your town, don’t miss the opportunity to see it. 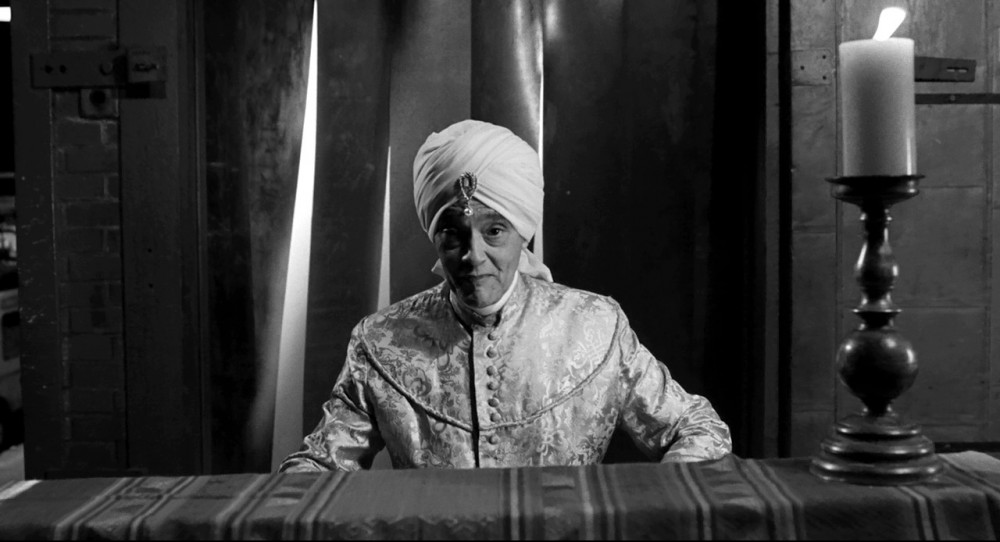 Above: Korla Pandit — A still from the movie Ed Wood which features a dance and music show with Korla on his organ.