The plot for this film is relatively complicated for a comedy. Rock stars as Roger Willoughby, a salesman at Abercrombie & Fitch – your grandfather’s Abercrombie & Fitch of yore when you could buy a safari set-up of rifles, zebra skins, ammo, and tents. Roger is a celebrity in fishing circles, known for his bestselling book, “Fishing Made Simple.” He can tell customers the perfect times to fish, the right lures for all occasions, and the proper way to cast a line. But Roger is hiding a dirty secret – he hates fishing and can’t stand being around fish.

Paula Prentiss co-stars as Abigail Page – a sarcastic woman on the go. She meets up at Abercrombie & Fitch with her girlfriend, Easy, played by the amazingly beautiful Austrian, Maria Perschy. (Perschy later had less film success, landing the lead in the 1973 film House of Psychotic Women, which happens to be #21 in my Netflix queue.) In case you missed it, her character’s name is Easy. Since her character is pretty wooden throughout the movie, I guess you had to be there.

Not knowing of Roger’s shady fishing history, Abigail and Easy blackmail him into representing A&F at a fishing tournament at Lake Wakapoogee. Through the next 15 minutes and three locations, Roger explains to the ladies that he can’t fish. Since Roger’s new lady friends convinced his boss to sign him up for the tournament, Roger can’t back out. Roger makes the best of it and goes to the lake a few days early to practice the sport. Abigail and Easy soon follow Roger to the lake, with Abigail and Roger ending up in all manner of silly predicaments where people walk in, see them, and think something is going on that could be easily explained, but isn’t. Roger fiancée, Tex, surprises Roger at the lake and the film busts wide open.

This film is one of Howard Hawks’ last, finding him on the tail end of a remarkable career directing such Hollywood classics as Rio Bravo (1959), Red River (1948), His Girl Friday (1940), and The Thing from Another World (1951). Man’s Favorite Sport? is an enjoyable comedy, though the 120 minute running time feels about 30 minutes too long. The score is by the legendary composer Henry Mancini, with an opening theme song penned by Mancini and Johnny Mercer. Naturally, the costumes are from Edith Head.

Through the farcical meanderings the story takes, my favorite part of Man’s Favorite Sport? is the art decoration by Alexander Golitzen. Golitzen had a talent with making 1960s films more lovely, especially in That Touch of Mink (1962), Airport (1970), and a personal favorite – The Ghost and Mr. Chicken (1966) . In Man’s Favorite Sport?, every cabin, bar, and fake forest are so visually stunning, you will wish you were there. 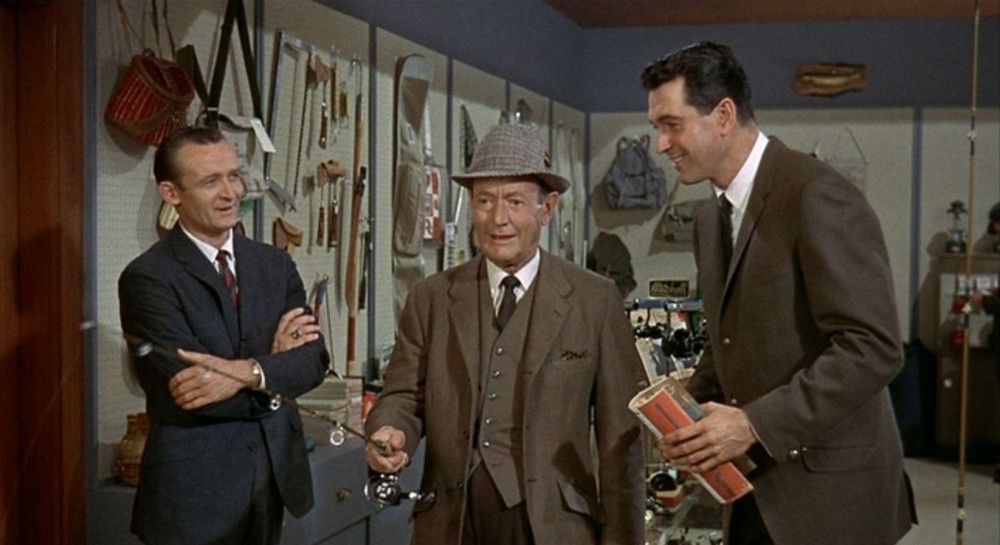