Home » Film » Mant! – The Movie Within The Movie

In 1993, director Joe Dante, made a little known film that has since become a cult classic for lovers of ‘B grade’ 1950’s science fiction. Matinee, starring John Goodman, is a feel good comedy about a Hollywood huckster who premieres his gimmicky new monster movie in the town of Key West Florida while the 1962 Cuban Missile Crisis is coincidentally occurring. Events are particularly important to the main characters in Matinee as Cuba is a scant 94 miles from Key West.

The movie has that over-all cute feeling that was so common in post “E.T.’ Hollywood. Despite it’s sugary feel, Matinee does a good job in details and characterizations, and is a fun ‘must-see’ for true fans of the early sci-fi genre. John Goodman is quite fun as lovable and endearing schlock movie producer “Lawrence Woolsey’.  His huge cigar is only exceeded in size by the fins on his  Cadillac convertible.

In fact, Goodman’s character is a thinly disguised portrayal of real-life horror mogul William Castle ; whose side-show antics of rigged theater seats and rubber suited actors molesting patrons are faithfully recreated in Joe Dante’s production. But- the real genius of Matinee is it’s movie- within- a movie… ‘MANT!’

The central location  is the theater where the the B-grade movie premiere is taking place. While the climatic moments of boy-meets-girl and other cinematic cliches are unfolding Lawrence Woolsey’s production of ‘MANT! Half Man-Half Ant!’ is blazing on the the half-acre screen behind them.

What we see of ‘MANT!’ is a lovingly produced homage to the many cheap science fiction movies of the 1950’s. Every formula moment of these ‘big bug’ movies is skillfully parodied using many of the actors who originally starred in these silly masterpieces of pop-myth.  Robert Cornthwaite, mad-scientist from 1951’s ‘The Thing from Another World’, re-dons his scientific halo to explain how sloppy dental x-rays have mutated a hapless shoe salesman into ‘the worst of what our friend the atom can dish out!’ Other veterans of monsters and mayhem in parodies of past roles are  William Schallert, Kevin McCarthy and Roger Corman reliable Dick Miller. Watch for the many helpful ‘scientific explanations’ and the inevitable sermon about ‘Mankind playing God’ . All required ingredients of low-budget sci-fi celluloid.

‘MANT!’ is supposedly filmed in ‘Atomo-Vision’ with soundtrack in ‘Rumble-Rama’. These out of control special effects bring events on the screen, in the theater and in the outside Missile Crisis into climatic collision.  Apparently contemporary CGI  can’t compare to electric buzzers in the seats, masonry cracking sub-woofers and guys in monster suits kidnapping your girlfriend and popcorn!

Take heed teenage boys! Bad sci-fi can directly result in your being trapped in a fallout shelter with the smartest, and maybe prettiest, girl in the class… bravely facing your duty to re-populate a devastated world!

Matinee  transports us back to a time of being glued in front of the black and white Magnavox munching Graham Crackers and milk. Many a school boy crush is reawakened by Kellie Martin’s teen nymphet ‘Sherry’, a sort of Patty Duke with too many hormones. Producer Woolsey’s live-in star and long suffering floozy ‘Ruth Corday’ is wonderfully portrayed by Cathy Moriarty.   Ruth not only stars as  the always understanding finance of the half-man half-ant of ‘MANT!’ , but does double duty as a nurse in the theater lobby handing out insurance policies against ‘death by fright’. One of real life producer William Castle’s famous gimmicks.

Along for the fun is an assorted cast of 1962 stereotypes including an incompetent teenage hoodlum who recites really bad poetry; a teenage heroine with leftist peacenik politics and is dragged from the civil defense  ‘duck and cover’ drill screaming “you’re all going to die!” It’s not a surprise since we later see that her Dad wears turtlenecks and has a beard! Jesse White, the immortal ‘Maytag Repairman’, is obviously having a great time as a movie distributor who believes the ever expanding disasters around him are all part ‘MANT’s showbiz appeal.

In another stroke of genius Matinee also manages to recreate many a childhood’s Cold War nightmare with eerie accuracy. If we didn’t have Kansas tornadoes chasing us, we tossed and turned to visions of H-Bombs going off in our backyards!

Not to be out done by my other OCD movie freaks, I was half-way through painfully editing together all the ‘MANT!’ scenes from Matinee when the heaven’s opened and director Joe Dante released the same concept – only much better! 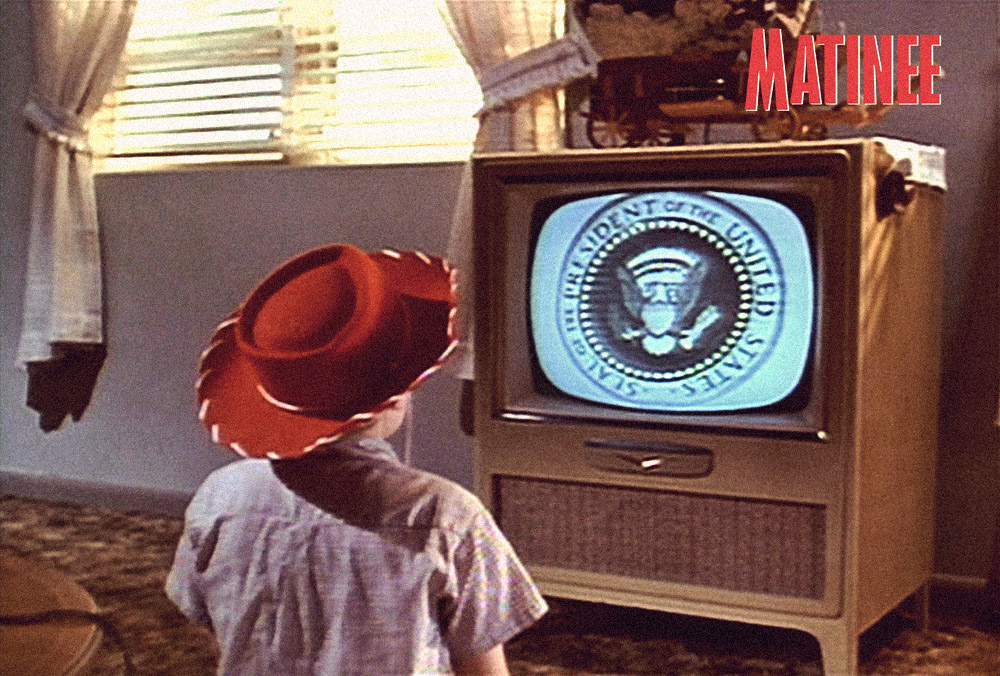 Above: 1962- the nation braces for nuclear war! 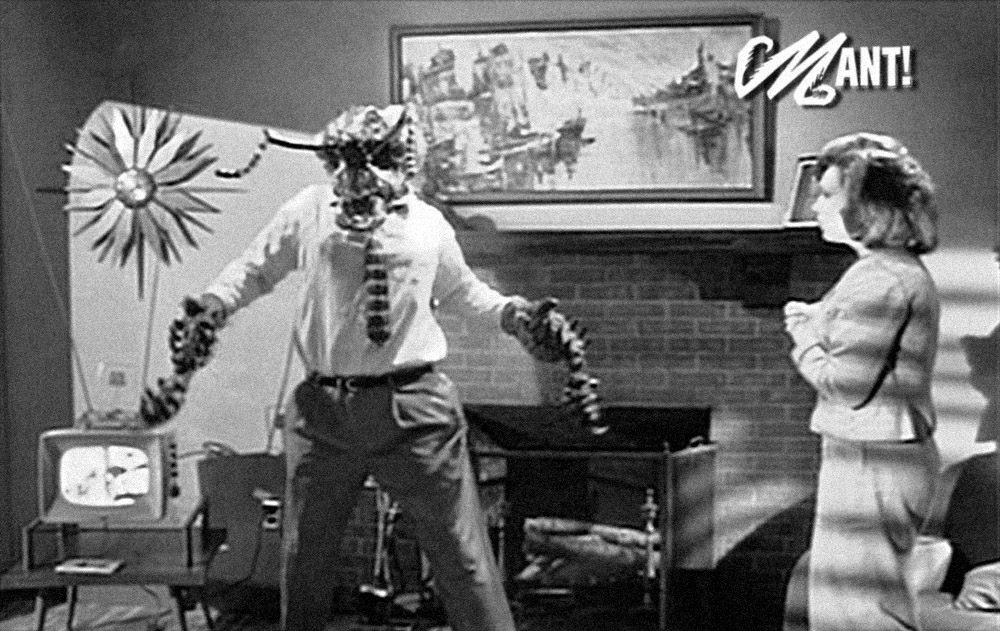 Above: Feeling the effects of mutating into MANT! – half man-half ant, Bill feels confined by his suburban life and heads downtown to cause mayhem and destruction. 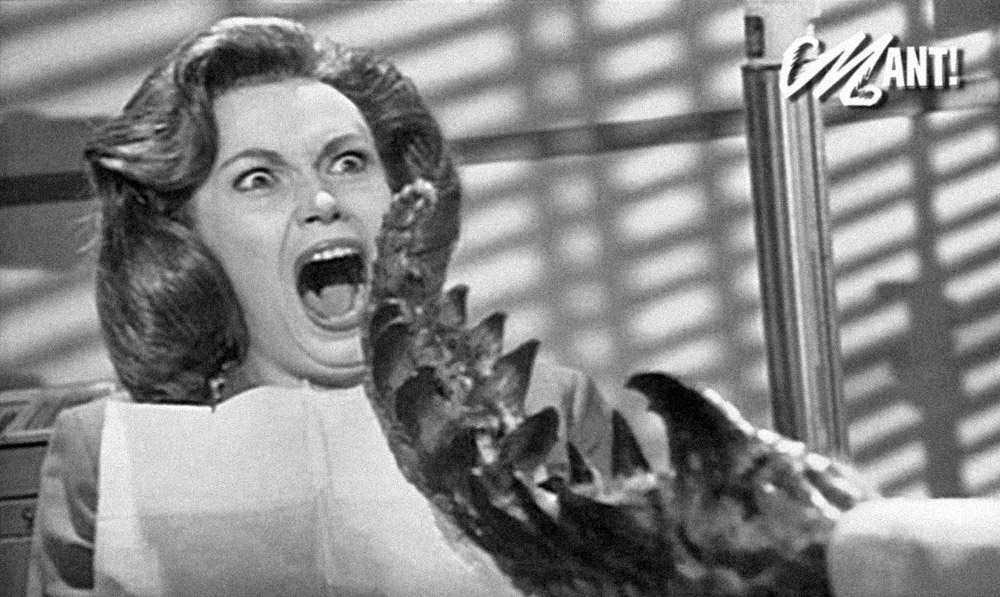 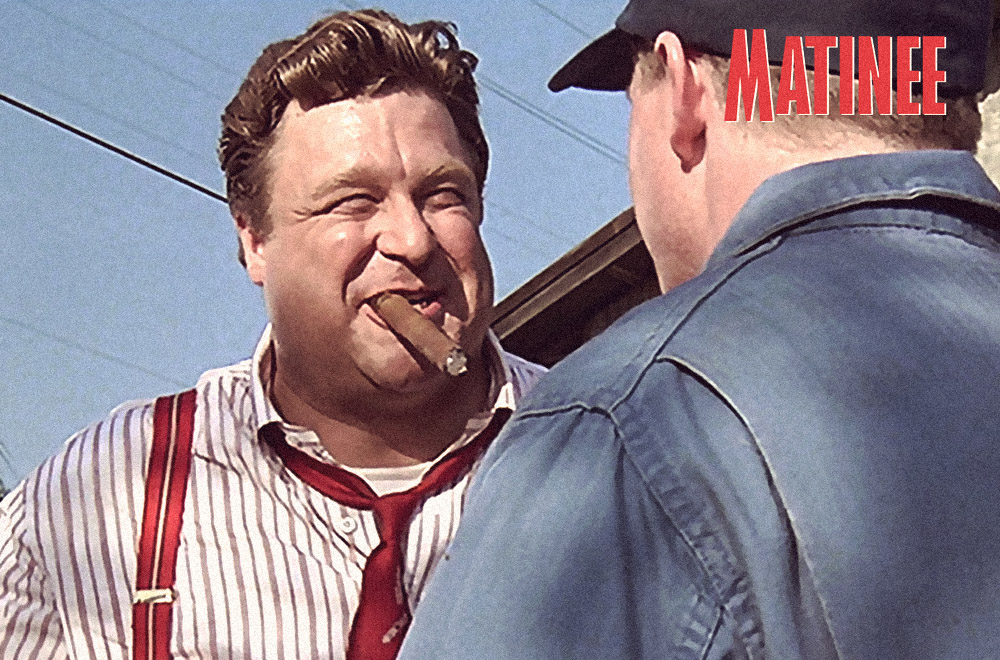 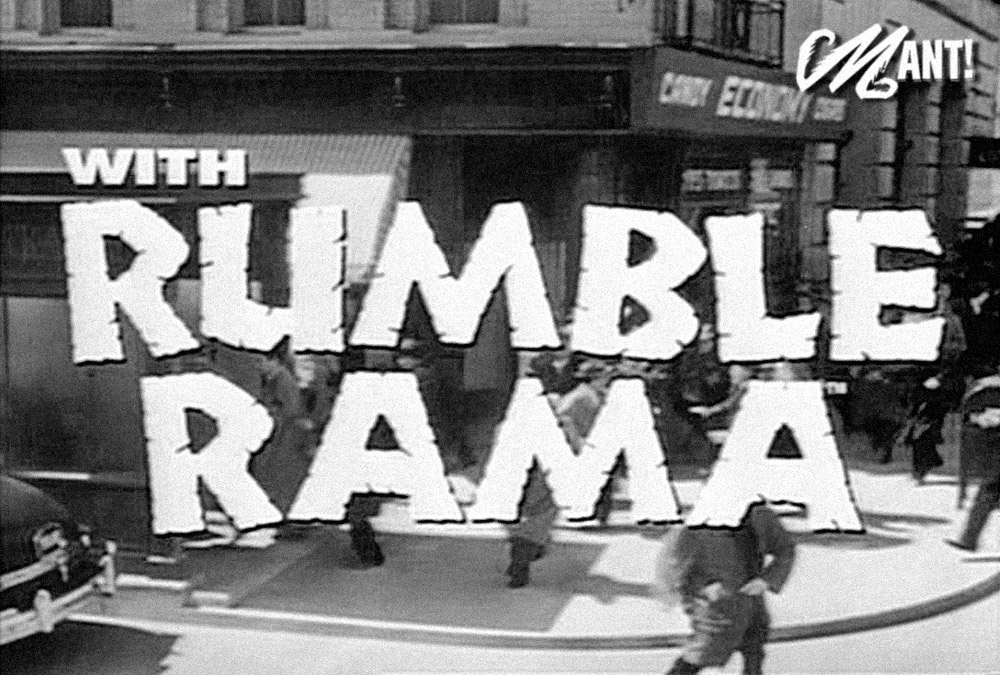 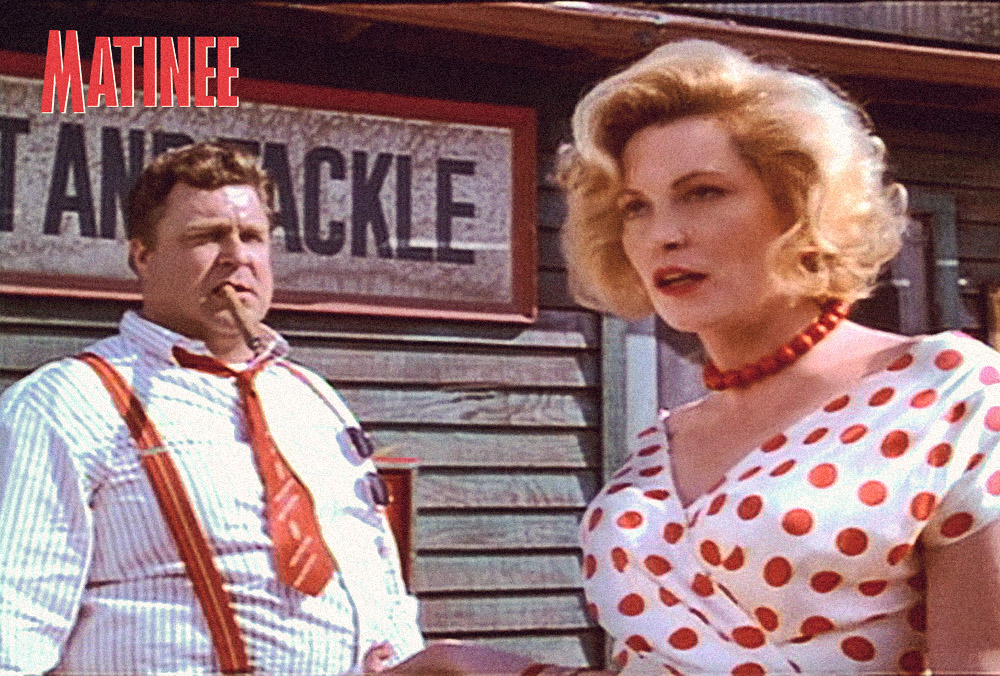 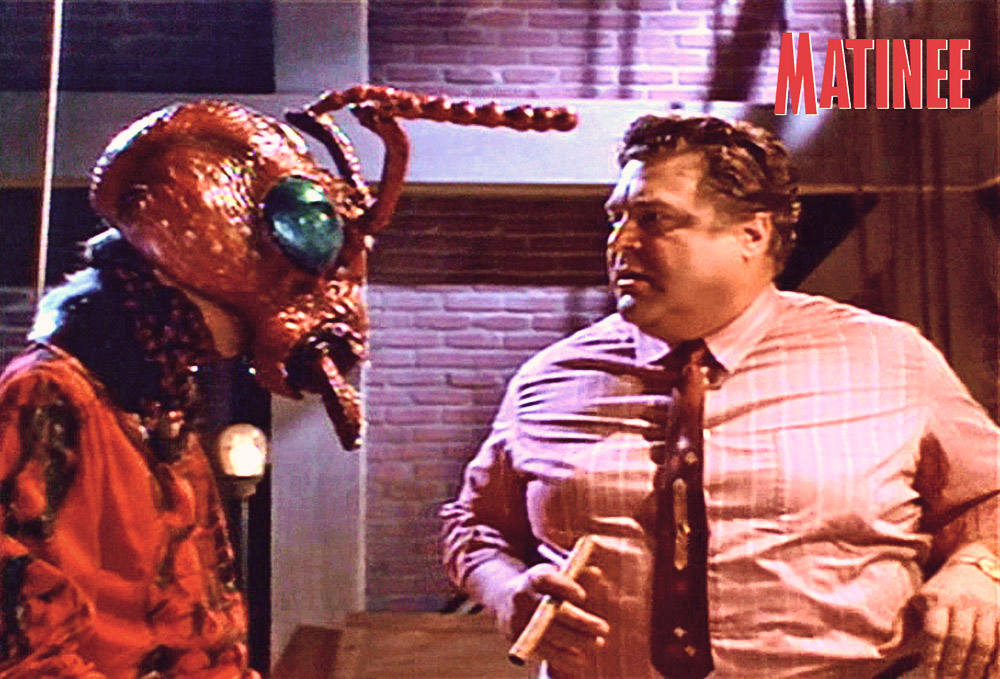 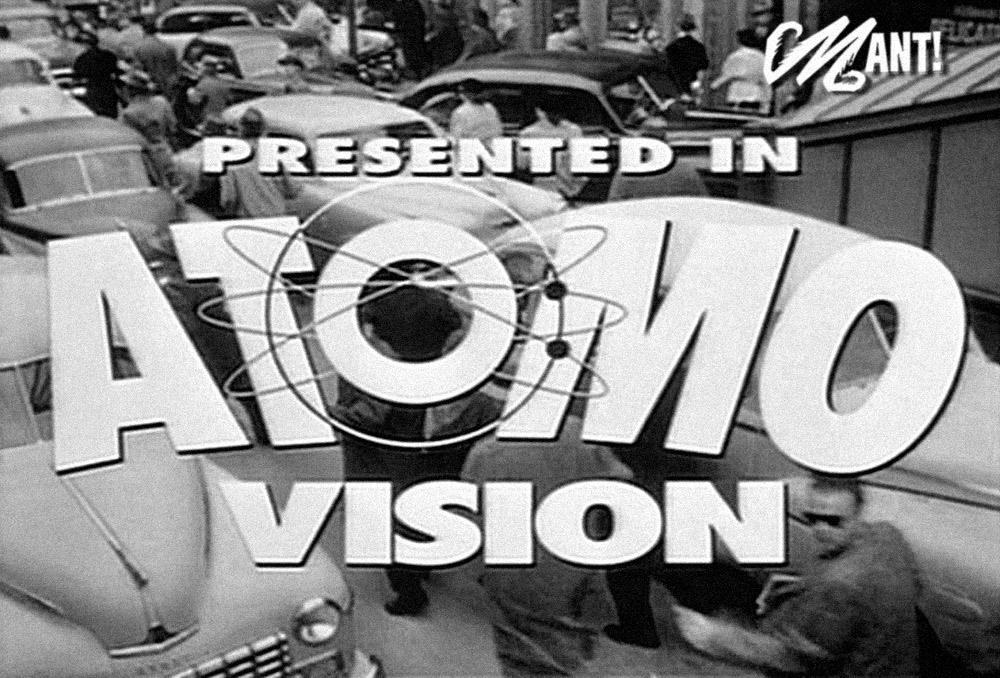 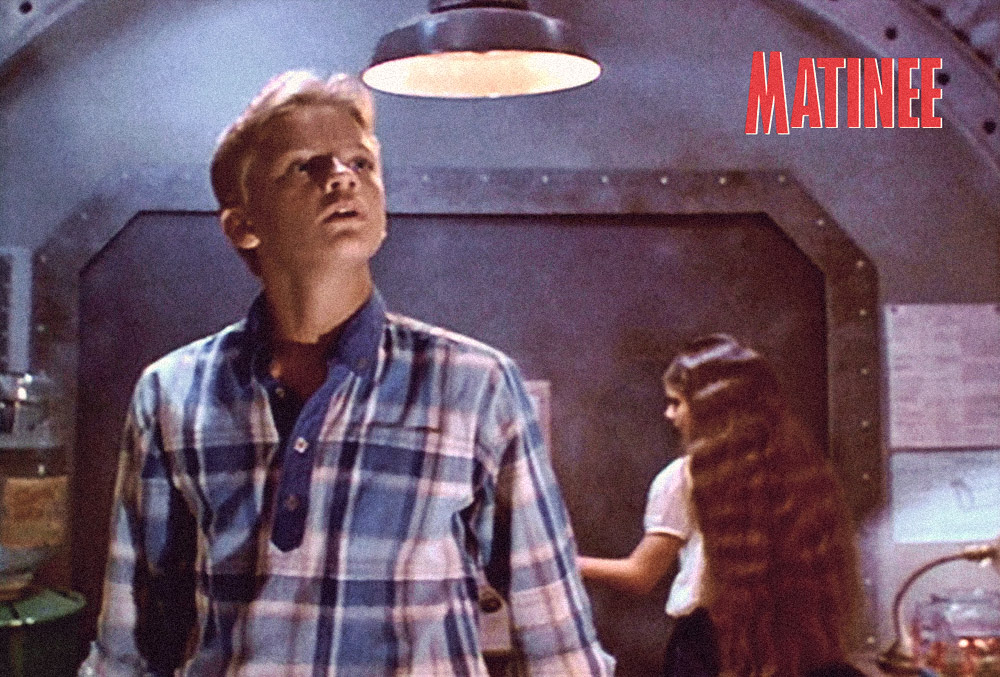 Above: Trapped in a fallout shelter in the basement of a movie theater two teenagers (Simon Fenton) and (lisa Jakub) believe that World War Three has begun above them.