Edwards and Sellers team up to make a slapstick comedy for the mod set. The result is a smorgasbord of sight gags presented on a set that might be every mid-century enthusiast’s dream home. Scenes are stolen from Sellers by two things: Levinson, the drunken waiter (played by Steven Franken) and the house. If you love 1960s architecture, you may excuse the extended visual jokes to take in the details of this ultimate party house—the sunken conversation pit, the spiral staircase, the indoor waterways, and the outdoor pool area.

Sellers plays bumbling Indian actor Hrundi Bakshi, who inadvertently gets invited to a big Hollywood party. From the moment he arrives at the party, Bakshi is ensnared in a series of awkward situations. French cinema buffs may note the similarities in tone and pace to Jacques Tati’s series of Monsieur Hulot films. Indeed, The Party was intended as an homage to Tati’s oeuvre.

The Party morphs from a quiet, sophisticated soiree into a drab dinner party, which in turn morphs into a rousing cacophony and the big bubbly finale where culture meets counterculture. Mancini’s score holds the event together as the band shifts from standard martini lounge instrumentals to pop psychedelia. Pink Panther fans will enjoy the audible wink as “It Had Better Be Tonight” plays in the background during one of Bakshi’s countless blunders.

The Party is not must-see cinema, but it is a worthy inclusion for any Blake Edwards or Peter Sellers movie marathon.

Above: Everyone needs an elephant at home 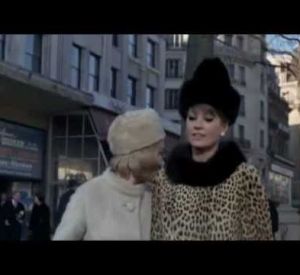