The opening begins with an ominous scene. In succession, skiers descend a snowy mountainside under moonlight in what surely represents the director’s vision of the Archangel Lucifer descending into hell. Then the credits announce “Starring Frankie Avalon” as Avalon sings the theme song. Thus begins another entry in American International Pictures’ series of Beach movies.

The film proper leads off with an unbilled Annette Funicello teaching a sex education class. She explains in vain that one can “have fun without sex”. Todd (Frankie Avalon) and Craig (Dwayne Hickman) are two of Annette’s college students, pursuing their carnal desires without success. Todd wants Linda (Deborah Walley) and Craig wants Barbara (Yvonne Craig). Meanwhile, Linda, Barbara, and the rest of the female student body are swarming around Big Man on Campus, Freddie (Aron Kincaid). Todd and Craig discover that the ladies are following Freddie on a ski trip during school break, and the two Casanova wannabes make a plan to score.

The soundtrack for the bus trip from Santa Monica to Idaho is provided by none other than perennial whiner, Lesley Gore (“It’s My Party,” “You Don’t Own Me,” “Leave Me Alone,” etc.), here singing “Sunshine, Lollipops, and Rainbows”. Once at the ski resort, Todd and Craig execute their poorly thought out plan, which includes pulling pranks and dressing in drag. Jane (Frankie Avalon) and Nora (Dwayne Hickman) quickly blend in with the rest of the girls and enjoy a pillow fight. Freddie falls for Nora and Swedish ski instructor, Nita (the beautiful Bobbi Shaw), falls for Todd. We’re treated to a dance at the lodge fireplace, a performance by James Brown (leading the all-black ski patrol), and the sights and sounds of a skiing, yodeling polar bear.

Things start to get complicated when Nora won’t be romantic with Freddie, Nita won’t sleep with Todd, and the drag ruse is uncovered. Giving up on scoring, Todd and Craig race back to their beach house in Santa Monica. Meanwhile, Linda realizes the whole thing is her fault because the women pushed the men too far. Joined by Barbara and the rest of the gang, Linda pursues Todd to the beach. The Hondells perform “Ski Party” and “The Gasser” on the beach while everyone makes up. End scene.

While 1965’s “Ski Party” is an unofficial entry in the American International Pictures’ series of Beach Party films, it actually provides better entertainment than its more famous cousins. A larger budget was allotted to this film, with better directing and writing, and location filming at the Sawtooth National Forest in Sun Valley, Idaho. Thankfully, this film also includes more great music than most Beach films while forgoing some of the usual Beach film nonsense typified in Eric Von Zipper (Harvey Lembeck) or a past-his-prime Buster Keaton.

In addition to his aforementioned failed effort to translate Tintoretto to the Silver Screen, the director of “Ski Party,” Alan Rafkin, also directed such beautiful fluff as “How to Frame a Figg” and “Shakiest Gun in the West” – both starring Don Knotts, and episodes of “Bewitched,” “I Dream of Jeannie,” “Laverne & Shirley,” and “Charles in Charge” in the 1980s. Also, the lovely Yvonne Craig is most famous for her role as TV’s beautiful “Batgirl,” Barbara Gordon. 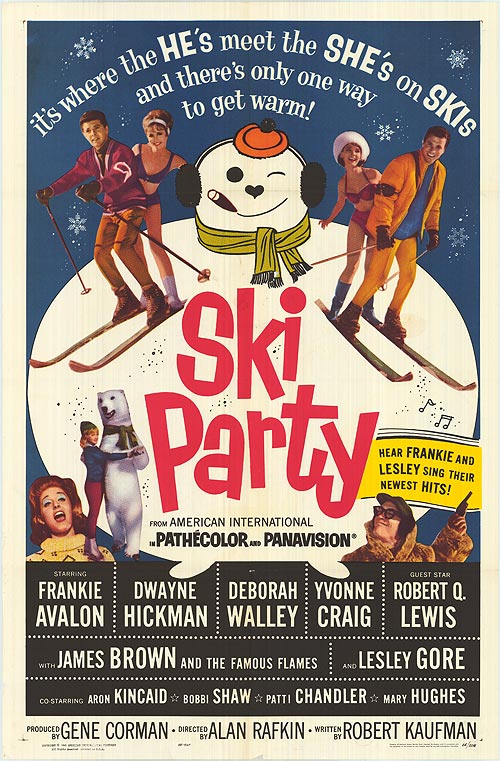