Home » Film » Thoughts on The Silencers

Loosely based on the series of Matt Helm novels by Donald Hamilton, “The Silencers” features Dean Martin as erstwhile counter agent Matt Helm. Not to be confused with the counter agent at Northwest who lost my luggage last week. Helm isn’t a secret agent who spies and stuff, he just causes problems for other spies. Which is good work if you can get it. Helm was formerly with the organization I.C.E. (Intelligence and Counter Espionage).

Released within months of the premiere of his popular long-running TV show, “The Dean Martin Comedy Hour” in 1966, “The Silencers” is the first of four films starring Dean Martin as Matt Helm. Highly successful when released, “The Silencers” was followed the same year by “Murderer’s Row,” in the next year by “The Ambushers,” and two years later in “The Wrecking Crew” from 1969.

The beautiful and talented Stella Stevens co-stars, looking better than ever. Victor Buono, who I will forever remember as the mutant Fat Man in “Beneath the Planet of the Apes” (1970), plays the Chinese bad guy Tung-Tze. Music is presented by Elmer Bernstein, the composer of “To Kill A Mockingbird” (1962), “The Ten Commandments” (1956), and “Leonard Part 6” (1987). The famous opening credit sequence involving a parade of buxom beauties dancing amongst the titles features “Guest Star” Cyd Charisse.

Our adventure begins with Matt Helm in his swinging bachelor pad, dozing in a large, round, rotating bed. Helm is dreaming about the simple things – a cowgirl in a bikini, a woman fishing in a swimsuit, and a swordswoman in a bra and fishnet stockings. He is, after all, the photographer for Slaymate magazine. Upon awakening, the bed transports Helm into another room, raises up in the air, and gently dumps Helm into a pool filled with bubbles. Helms’ assistant Miss Kravezit – Miss Lovey Kravezit – hands her boss a bottle of Scotch. Some exposition follows which informs the viewer about Helms’ employ with Slaymate and his semi-retirement from I.C.E. Helm’s boss at I.C.E., James Gregory, who incidentally played alongside Buono as General Ursus in “Beneath the Planet of the Apes,” tells Helm of a fiendish plot labeled “Operation: Fallout,” which has been hatched by the caricature Tung-Tze. Tung-Tze’s organization, the BIG O, the Bureau for International Government and Order, plans to… do something… described in vague terms… which involves a missile and perhaps a can of Low-Cal Egg Foo Yung… or something. Don’t worry – all will be made clear 90 minutes into the film.

Matt Helm then goes somewhere to do something, does that thing, and returns home to find women’s clothes strewn about his living room – what you and I would call a messy roommate, but what Matt Helm affectionately refers to as a “treasure hunt.” He locates said “treasure” in his bedroom and asks her “Have you been vaccinated?” I guess she didn’t have the answer he was looking for so she tries stabbing him, but his buddy Tina, played by Daliah Lavi, walks in and shoots her. It turns out she wasn’t a treasure after all, but an agent from Big O! Tina tells Matt the place is surrounded. Not one for being boxed in, Matt retrieves his knife-shooting camera. You read that correctly. Helm shoots one of the Big O agents outside with the camera then judo chops him to death and drives off.

Tina and Matt make a plan to head to Phoenix, because someone heard someone may be doing something there, and they book a room at the oddly named Phoenix Hotel, where organ music plays poolside and Stella Stevens reveals just enough to keep things interesting. Perhaps the Tempe Hotel in Tempe was booked. (Interesting note: I was in Arizona in the summer of 1999 tooling around in a dune buggy with my friend Jayna when her Teen Trouble Alert wristwatch went off. She insisted we had to fly to Phoenix on the back of an eagle carrying a bucket of water in order to take care of some official business. Luckily, I was able to spend the night at a nearby Best Western, verifying that Phoenix does have other hotels.)

Back at his room, Helm undresses Tina and finds a gun in her bra. You and I might lecture Tina about better places to conceal hazardous devices, but Matt Helm giggles and compliments her “booby trap.” That man has got something I want!

Matt and Tina decide to take in a show at the Slaygirl nightclub. Tina tells of a tape being transferred from a Big O agent to Gail Hendricks’ (Stella Stevens) date via stripper. At what point in the tape transfer chain do you think Matt Helm gets involved? Yes – the stripper. But Gail beats him to the punch and grabs the tape first. Any normal guy would take Gail back to the I.C.E. headquarters for interrogation, but Matt Helm, aided by his crafty mind, decides to rip Gail’s dress off in one quick movement, leaving her in only a bra and underwear. I have never seen anything like it. You really have to see this to believe it. I mean, I’ve seen babies born, strangers die, and Superman turn coal into a diamond, but this split second removal of clothes is the most miraculous vision I have ever seen, or will ever see.

The next morning, Helm makes plans to sneak into the Big O headquarters to stop something bad from happening. Helm’s boss outfits Helm with a reversible gun that shoots the person holding it, and a sports coat with hand grenade buttons. Helm takes off with Gail to find the hideout. After a slooooowwww 15 minute romantic interlude in the film where Dean shines as an amazing drunk and Stella sinks as a horrible drunk, they make it to the hideout. Finally, Tung-Tze explains that he is going to hijack a missile to blow up a nuclear testing site in Alamogordo in order to spread a nuclear cloud, which will make the US blame Russia, thus beginning World War III. The audience finds all of this out literally in the last 10 minutes of the film.

Helm escapes with a judo chop, shoots a machine gun, does a roll, shoots more machine gun, and throws a grenade. The End.

Many dismiss this film as a sad parody of the James Bond films or a trashing of the more serious Matt Helm spy novels, but you really can’t go wrong with Dean Martin in his prime, doing what he does best – singing songs, playing drunk, and ripping off women’s clothes in the blink of an eye. You really do have to check out that scene. It’s on Youtube. 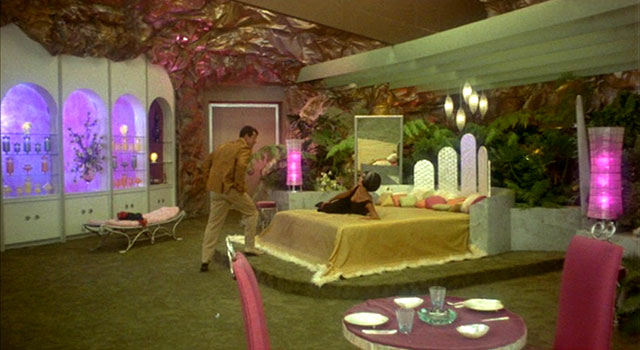 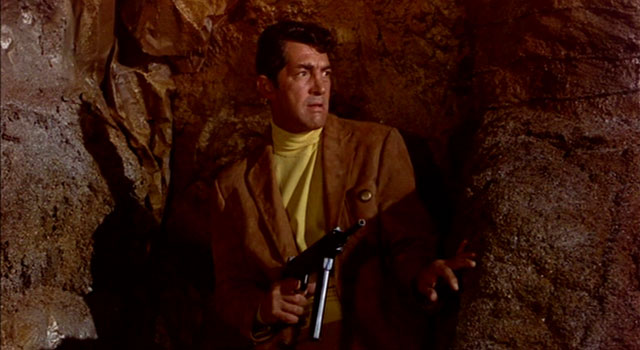 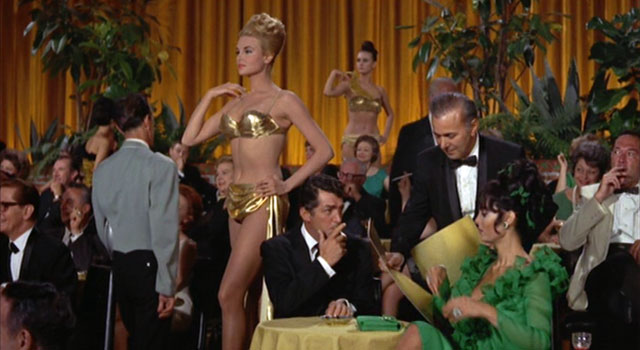