Home » Kitsch » A Tale of a Pink Flamingo

I remember the first time I saw the mighty Pink Flamingo formation. It was in front garden of my Aunt’s 1949 Art Deco Home. A spectacular home with a perfect lawn and a distinct late fifties sixties furnishing inside the house and a 1956 Ford Customline in the driveway. The cool thing about all of this was that the year was 1988.

Not much had changed in the years that they had moved into the home in the mid fifties. Seeing the Flamingos for the first time I didn’t quite know what their purpose was, and what was even more amazing was the fact that they were never stolen.

The next time I saw Pink Flamingos was in the backyard of a friends place who was a dedicated vintage fan. My friend Janice had what could only be described as a mighty flock of flamingo in the garden. Perhaps she had too many, but then again she was a kind of obsessive collector.

Several years later I moved to a small town called Armidale for a radio job and whilst doing my laundry in the basement of the apartment I lived in there I spotted a lone Pink Flamingo sitting on the washing machine. I took that Flamingo back upstairs and placed her in the window. I hoped to find a mate for her but that never happened.

The history of the Flamingo is interesting in that it was first designed in 1957, the fake birds are natives not of Florida but of Leominster, Massachusetts, which bills itself as the Plastics Capital of the World. At a nearby art school, sculptor Don Featherstone was hired by the plastics company Union Products, where his second assignment was to sculpt a pink flamingo. No live models presented themselves, so he unearthed a National Geographic photo spread. It took about two weeks to model both halves of the bird, brought into the third dimension by then-revolutionary injection-mold technology.

A flamingo-friendly trend was the sameness of post-World War II construction. Units in new subdivisions sometimes looked virtually identical. “You had to mark your house somehow,” Featherstone says. “A woman could pick up a flamingo at the store and come home with a piece of tropical elegance under her arm to change her humdrum house.” Also, “people just thought it was pretty,” adds Featherstone’s wife, Nancy.

This week Don Featherstone, the creator of the pink flamingo lawn ornament, died. He was 79.

His wife, Nancy, said he died on Monday morning, surrounded by family. He had succumbed to Lewy body disease, which is a type of dementia, she said.

“It’s a terrible disease,” she said. “You can’t do anything about it. But he fought it. He fought it to the best of his ability. He died with dignity.”

Featherstone, a Berlin native, worked for Union Products for 43 years, designing more than 600 items for the plastic company, she said. He had studied art at the Worcester Art Museum. 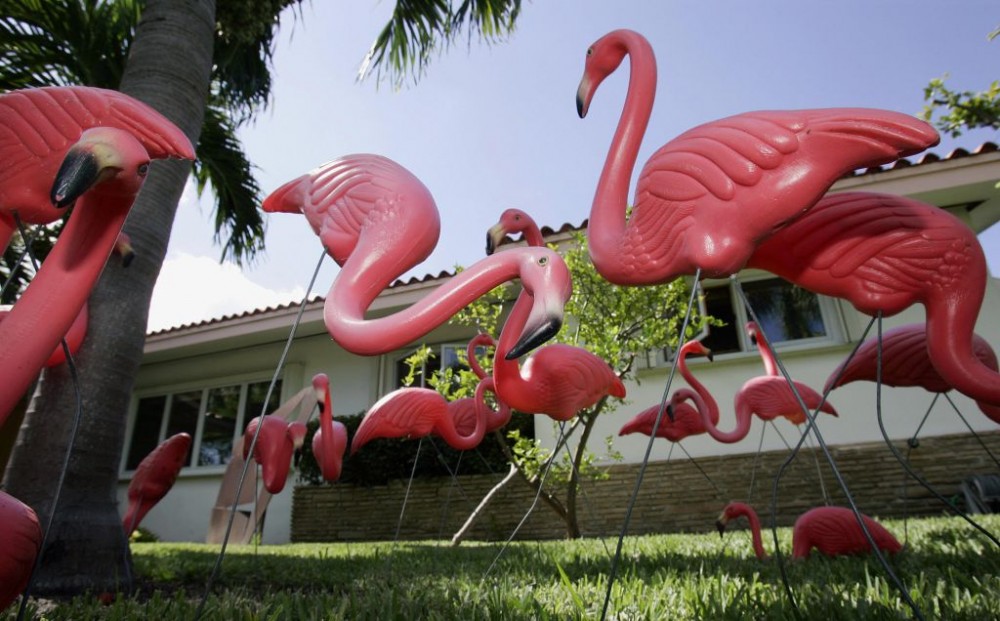