After WWII, America stood back and gazed upon itself. There was a new revitalized American Dream after all the bloodshed, home front hard work, and thick-as-molasses patriotism. The American Dream of the 1930s had been focused on working hard, men provided for their families, and hope to rise above the Depression. By the 1940s, post-WWII, consumerism and first wave feminism started to play a role in the American Dream, and by the 1950s the American Dream had encompassed the ideas of futurism and opportunity.

In the beginning of the 1940s, America was in the midst of World War II. Men were being sent overseas and women were being sent to the factories. Women in the workplace became a big stepping stone of first wave of feminism in the United States. For some women, this was the opening of a new door in the American Dream. Instead of simply wanting a husband, a family, and a place to call home, they now had the opportunity to seek out employment, a new financial freedom. This would allow a woman with or without a husband to make her own money, to be a contributor to the daily allowance instead of just receiving. By the time the war was over, instead of running back to their homes, women began to take on more jobs in the workplace until they married or became pregnant.

During WWII supporting the troops became the everyday topic for America. American companies picked up on this and exploited it as much as possible. This consumerism began to take over America because now even the poor man could support the troops. Advertisements began coming out in droves with military men and women pictured, easy suggestions for the everyman, and slogans like “…for the troops” began creeping into everything. Not only were people on the home front working hard, but they were becoming more of a consumer society. They could buy the bread that would support the troops, they could buy a war bond, and they could hope that a war hero would come home and be in their lives.

As WWII ended and the men and women of war came home, the American Dream shifted slightly. Women still wanted to be in the workplace and companies increased their output of advertisements, but now the focus was on obtaining the “perfect American household”. The perfect American household was a house in the suburbs, a steady job, being married, having a few kids, and keeping up with the Jones’. Despite the fear of the Reds being on American soil, a fear that would soon escalate, Americans were practicing their post-war resilience.

The early 1950s brought in two ideas that had come from the post-war resilience: opportunity and futurism. Music had dramatically changed with rock n’ roll with Sam Phillips’ musical phenomenon’s from the south like Elvis, Jerry Lee Lewis, Roy Orbison, and others. Opportunity had hit musically, literature was taking a turn of its own with writer’s like Tennessee Williams and Jack Kerouac, and film was entering a new age of glamour with Marilyn Monroe and Jimmy Stewart. Opportunity was beginning to surround American’s at every turn and it was quickly becoming embedded into the brains of all the American youth. Parents could encourage their children to be anything they wanted to be and feel that it would actually happen.

Futurism came into play in the mid-1950s, almost in time with the space race which started pretty much in 1955 when the US and the USSR began working on launching objects into space. American’s started becoming more aware of the future and what the future could entail. Unfortunately, instead of peacefully imagining a great future full of computers and flying cars like in the Jetsons (which wouldn’t appear until 1962), the US entered the Cold War. This was partially due to losing the space race to the Russians who launched Sputnik in 1957 and partially due to the fact that with the hydrogen bomb being tested in 1952, there was the realization that Russia could develop and drop a bomb from space at any time. Still, futurism remained a popular idea among the American population by pushing every day technology forward with better washing machines, better refrigerators, new gadgets and gizmos for the home and office, and the introduction of basic computers in a commercial capacity. Futurism opened the doors for new concepts and ideas, and new designs of common objects.

The American Dream of the 1940s and 1950s was by no means simple. Hard work, family values, and hope still remained the backbone of the dream, but you can see how these two decades expanded upon the dream.

Readers, before I let you go, I have one question for you: Do we still have the American Dream in action today? I’m asking you simply because I ask myself this same question all the time. 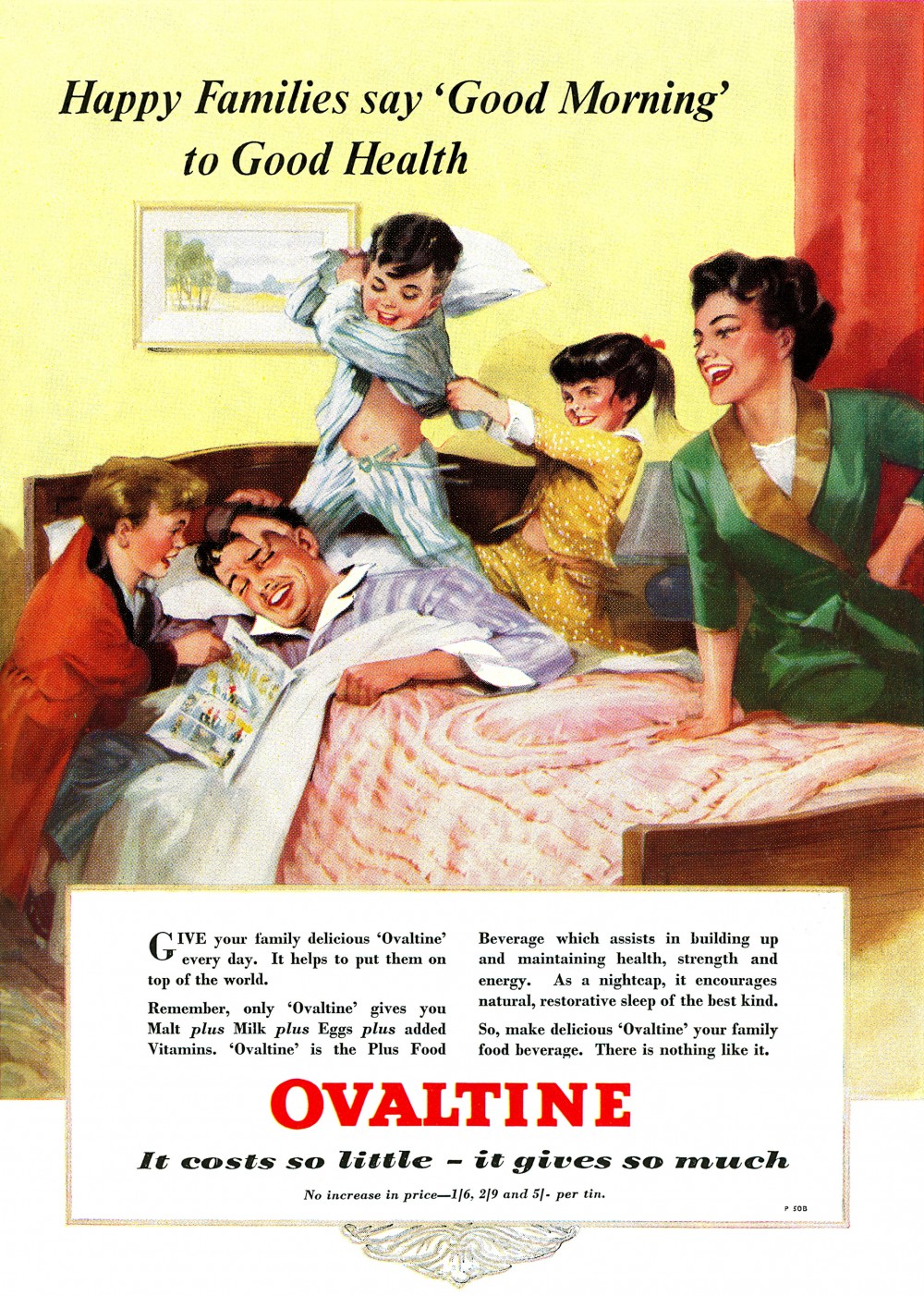 Above: Ovaltine — Image via the Ultra Swank Flickr Group 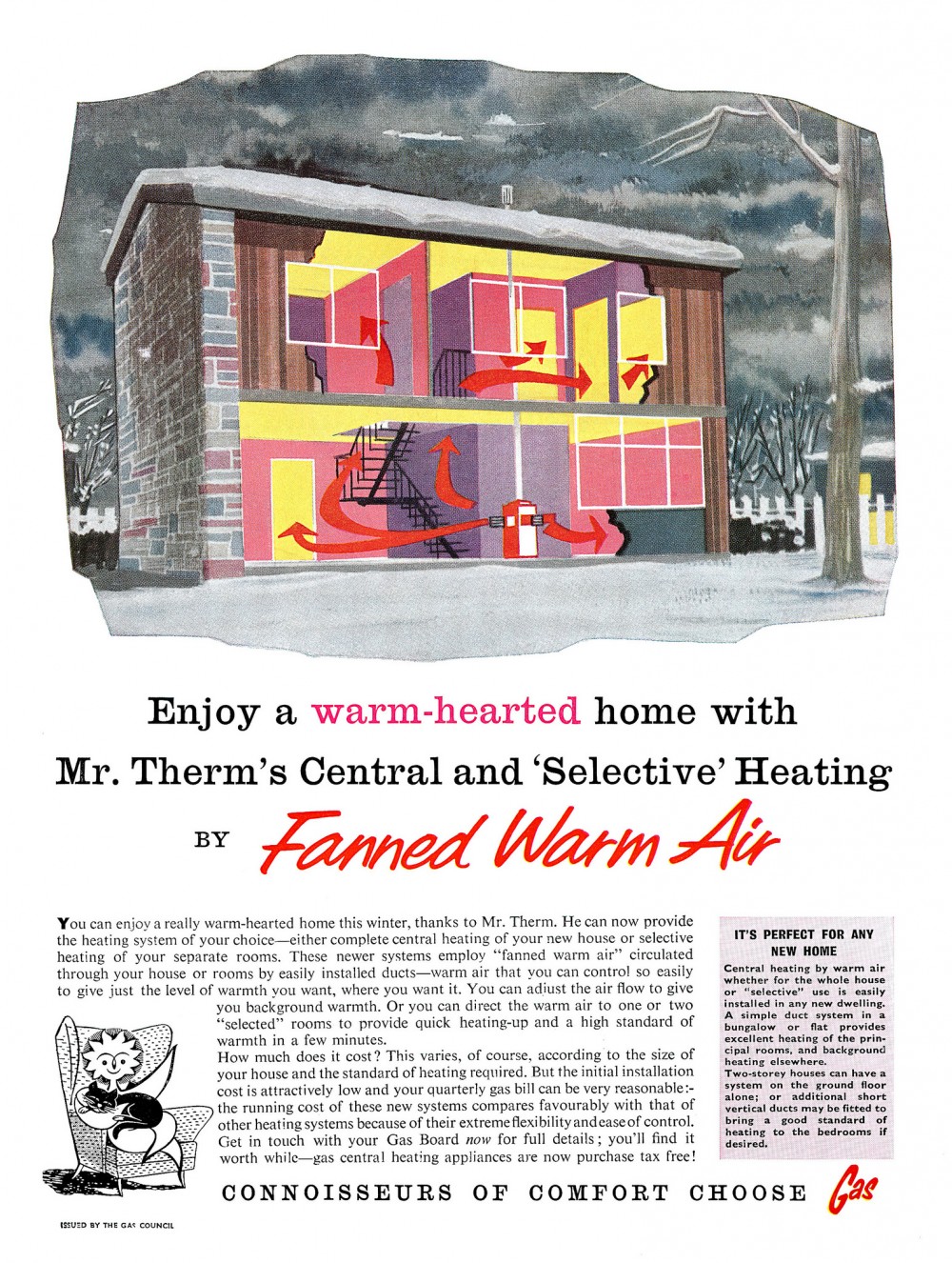 Above: Fanned warm-air — Image via the Ultra Swank Flickr Group 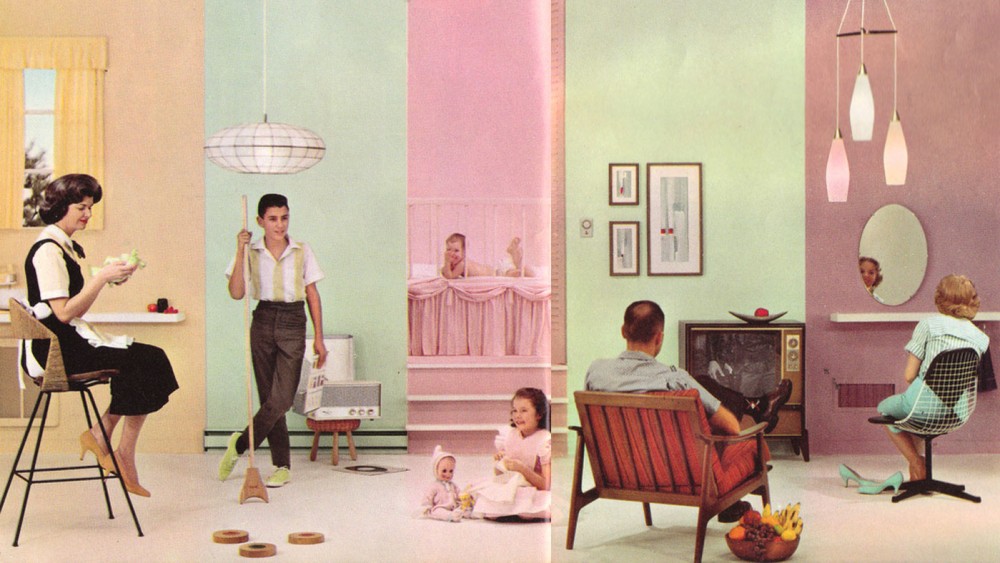 Above: Pastel kitchen — Image via the Ultra Swank Flickr Group 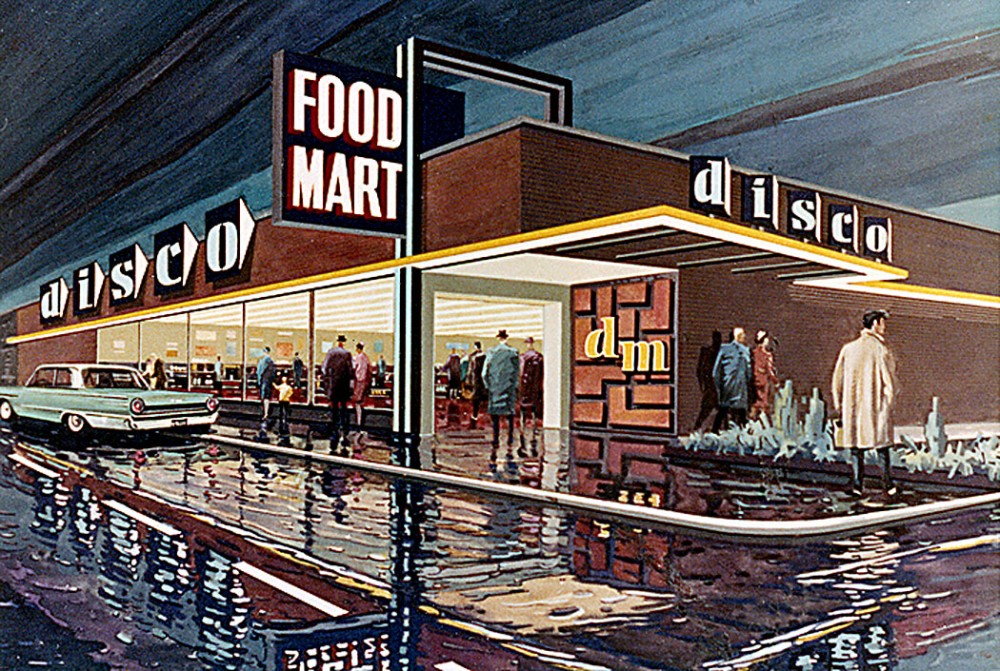 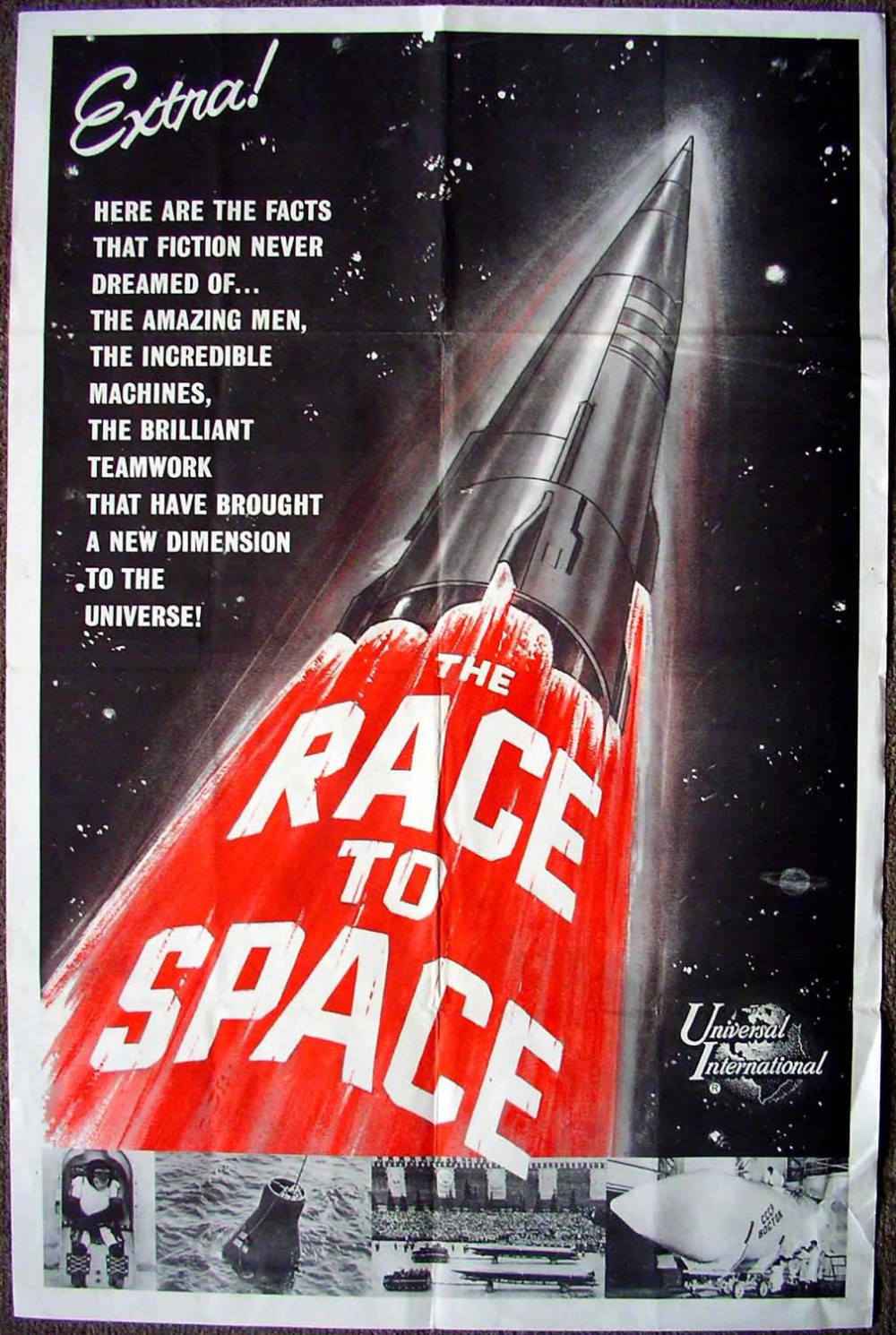 Above: Race to space — Image via the Ultra Swank Flickr Group 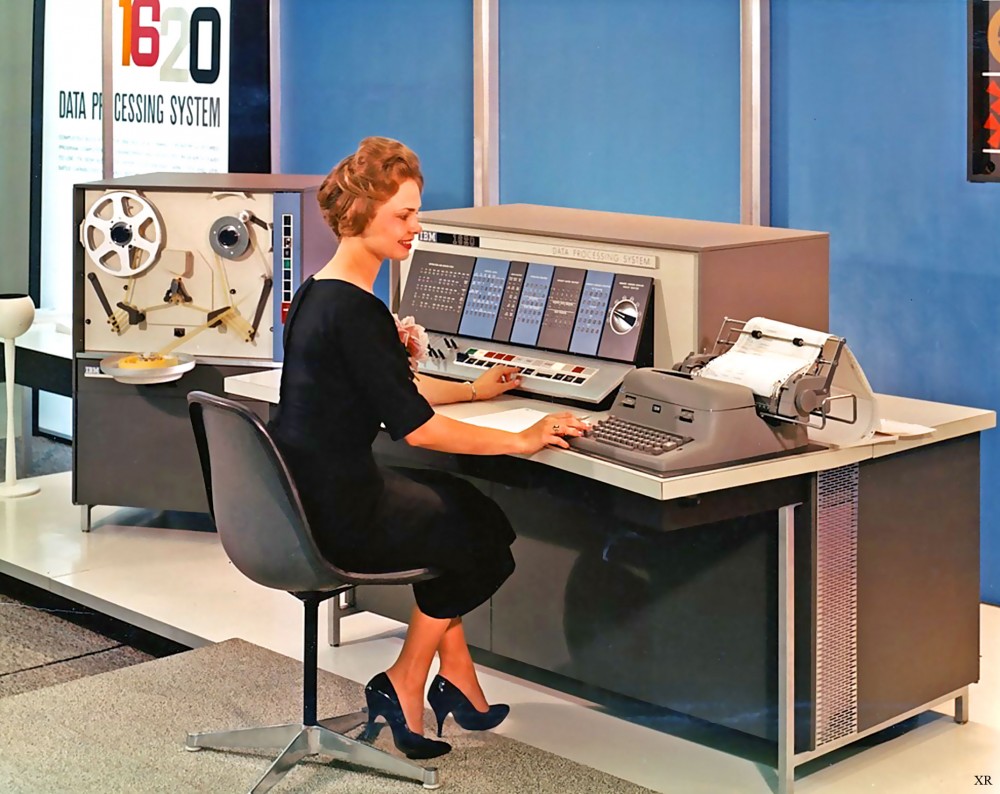