In the modern sense of the word, burlesque was a popular form of theatrical variety show featuring risqué comedy, parody, and pastiche. When it was exported from Victorian England to the United States in the 1840s, American elements were added: minstrel show performances, stage magic, contemporary athletics, and, most importantly, exotic dancing.

One hundred years later, all pretenses to high-brow art had been gradually abandoned. Striptease was now the main attraction at burlesque shows. Vaudeville-style comedians, preceding and introducing each performer, were the only elements left from the original form. The performances of the 1940s, 50s, and 60s, — what’s remembered fondly as the heyday of American burlesque — were actually the nadir of the original art.

The social climate of the mid-20th century had many similarities to the Victorian era that spawned American burlesque, particularly when it came to sex and nudity. Eisenhower-era prudishness included married couple Lucy and Ricky Ricardo sleeping in separate beds on TV’s I Love Lucy. Saying the word “pregnant” on television was not allowed by most network censors. And declarations against Lily St. Cyr by groups like the Catholic Legion of Decency often made the news.

It’s not hard to infer that burlesque in the mid-century was considered seedy and was not highly regarded, at least publicly. Yet the names of performers like Tempest Storm remained famous and such performers continued to tour not one, but two, national burlesque circuits.

By the late sixties, though, live burlesque shows were on the wane, competing with low-budget “nudie cutie” films and nudity in mainstream Hollywood movies. They were completely replaced by theatrically-released hardcore pornographic movies by the 1970s. Only local topless bars, featuring nameless local “talent,” remained for live striptease entertainment. The age of the nationally touring, nationally famous, ecdysiast was over. Further, the home video boom of the 1980s and the dawn of consumer-level internet access in the 1990s made going out into public for erotica obsolete, ensuring that the age of burlesque was never to return.

The 1990s saw the rise of the Lounge Revival subculture and, with it, the embrace of things mid-century retro. Punk in attitude, Lounge Revivalists questioned the mores of the day’s cultures — mainstream culture, grunge culture, rave culture, — even those mores established by the supposedly rebellious hippie culture of their parents.

The women of this movement found their own mode of social insurrection: Rather than view make-up, fashion, beauty and glamour as modes of male oppression, as their feminist hippie mothers did, second wave feminists viewed them as symbols of liberation and sexual power. And they decided to prove that power by demonstrating it before an audience: The Neo-Burlesque movement was born and elegant ecdysism returned to America.

Today, Neo-Burlesque straddles the line between mainstream and underground. Performers like Cha-Cha Velour, Ms. Redd, and Kalani Kokonuts are known only by burlesque enthusiasts. And yet burlesque-troupe-cum-girl-group The Pussycat Dolls have performed regularly as headliners in Las Vegas with celebrity guest stars. And Neo-Burlesque figurehead Dita von Teese has attained national notoriety both on and off stage — at one point being the spouse of shock rocker Marilyn Manson.

Neo-Burlesque’s niche acceptance is indicative of the differences in society between mid-century and today. And this forms the basis for the difference in style between Neo-Burlesque and the original form. Mid-century pop culture was fairly homogenous and pushed “undesirable” elements, like men’s magazines, “stag” films, and burlesque, completely underground. Modern society, on the other hand, has a sub-culture for nearly every niche interest one can name.

Original burlesque pre-dated rock-n-roll, hippy culture, the civil rights movement, feminism, the gay rights movement, punk, geek culture, and pretty much any other modern sub-culture that is commonplace today. And it steadfastly rebuffed all of those pop culture elements as they arrived.

This is most obvious in burlesque’s poster art. Aside from slick sideshow barkers in ages past, the most public face of burlesque has been the posters advertising the shows and performers. Showcasing this is Burlesque Poster Design: The Art of Tease from British publisher Korero Books.

At once an art book and a brief survey of burlesque itself, this over-sized volume keenly illustrates the past and brings it into sharp contrast with the present. Vintage posters for the Folies Bergere and the Ziegfield Follies share space with posters for modern troupes like Velvet Hammer and Black Cat Burlesque.

Ultra Swank readers, despite our affinity for vintage mid-century relics, will likely gravitate towards the modern posters in the book. This is because mid-century burlesque posters were largely slap-dash cut-and-paste affairs that did little more than provide dates, locations, and photos of the featured performers.

The modern posters, though, are reminiscent of carnival banners, cool comic books, or slick tattoo art. Here, photography is rare. And with fantastic work by low-brow and music scene poster artists like The Pizz, R. Black, and Big Toe, who needs it ? Just like in vintage B-movie posters, shameless hucksterism, cool urban fantasy, and deft artistic skill all combine to create stand-alone works that transcend the events they advertised.

Rather than belabor the point with (more) needless words, just check the review image gallery. It’ll prove the point. You need a copy of Burlesque Poster Design: The Art of Tease. Go get one. 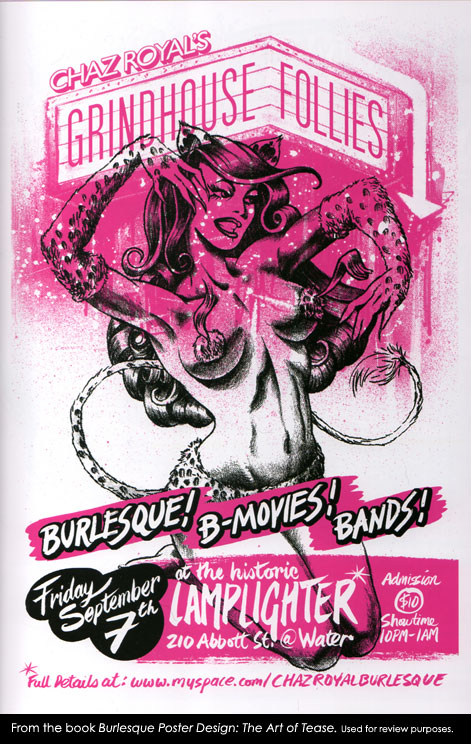 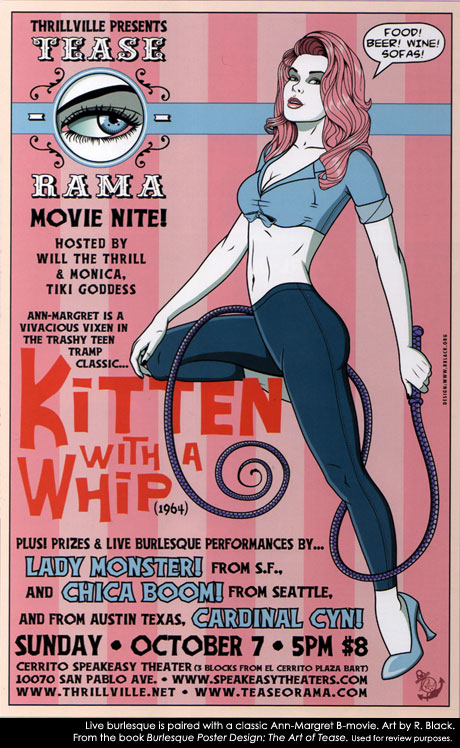 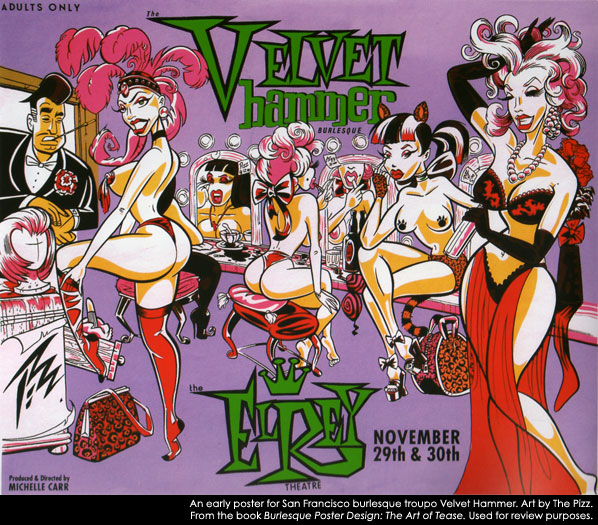 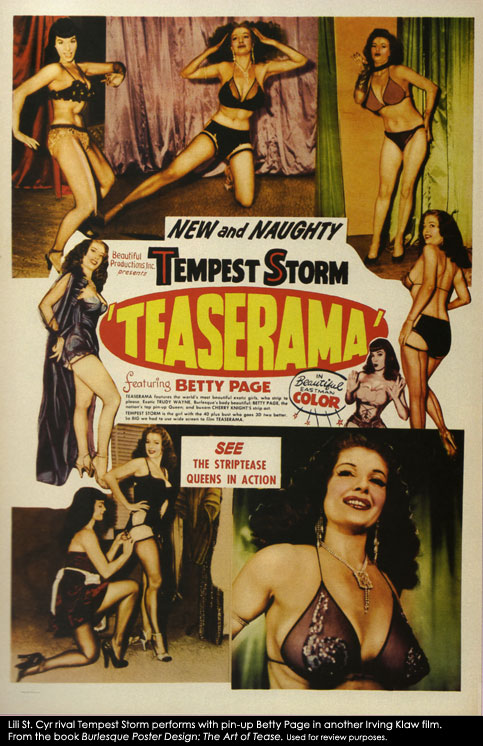 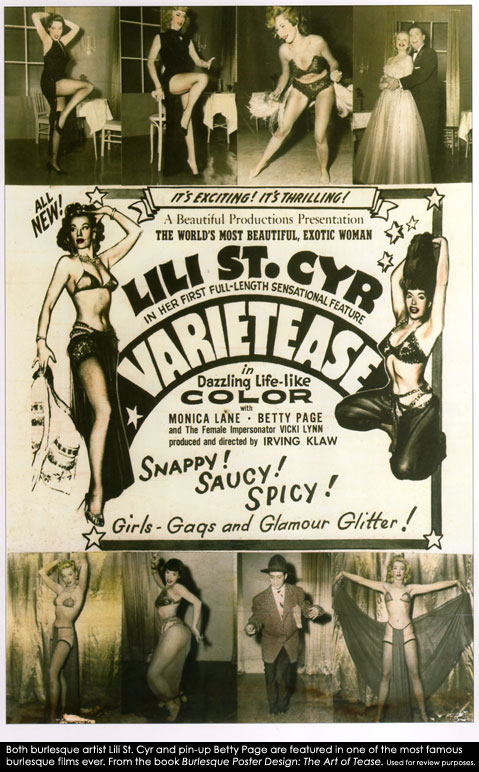 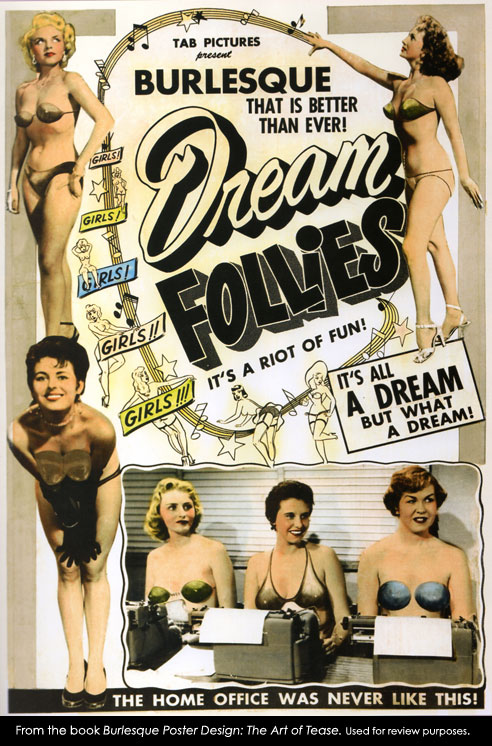 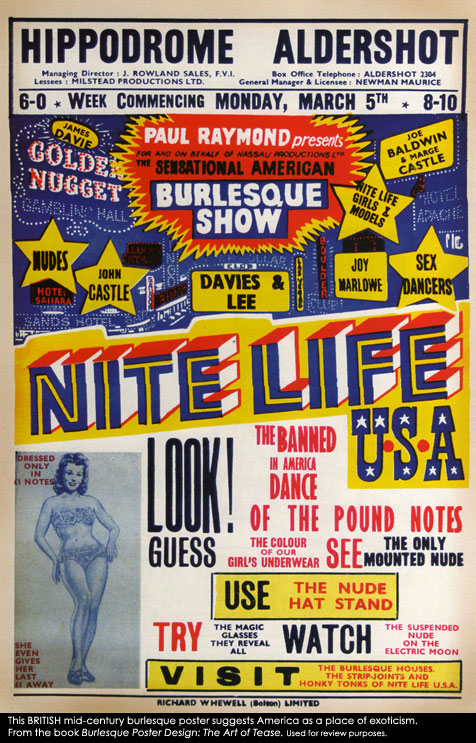