There are numerous times in my role as the self- appointed retro cultural historian for Boston that I feel just like Gloria Swanson in 1960 standing in that classic photo taken amidst the destruction of the once splendid crown jewel of cinemas, The Roxy Theater in New York City.

Boston, like so many other American cities, has been pillaged… truly stripped bare of what made it once such a vibrant and totally unique place to shop. Many highly paid city planners sit around polished tables in various meeting rooms and discuss where Boston went wrong and why the shopping heart stopped beating.

My job, and frankly my sanity, demands that I celebrate and jubilantly recall what Boston did right for so many years in attracting throngs of eager shoppers into the city’s shopping heart at Washington and Winter Streets.

These photographs from a variety of creative sources take us back to the happier, busier, totally alive 1950s, 1960s and early 1970s… a time when Boston pulsed with vitality and bravely fended off the threat of the ever encroaching suburban shopping malls that were quickly gaining in popularity and strength.

Shoppers came to Boston by train, bus and car and left with arms weighed down with boxes and bags embossed with names of legendary shopping giants that fewer and fewer folks can now recall. Oh, to see the streets filled with people again and have to wait to cross a street because there are just so damn many cars! To smell those perfume filled street floors and hear the ever beckoning “ting” of the elevator bells… ah, bliss!

Maybe some clever scholars will think of a way to blend today’s shopping trends with the nostalgic hubbub of what Boston used to offer… a bustling bazzar to suit all tastes and bank accounts. A reason to come back again and again!

All rise and salute those fallen golden stores of retro Boston… Jordan Marsh, Filene’s, Gilchrist’s, Raymond’s, White’s, Kennedy’s and Stearn’s. All gone now…. but live on in our memories, if we are old enough to be the lucky ones to know the secret thrills of walking those famous aisles and in classic photos like these I share with you all today.

My postcard to you from retro Boston, with Love and many scrumptious shopping memories. 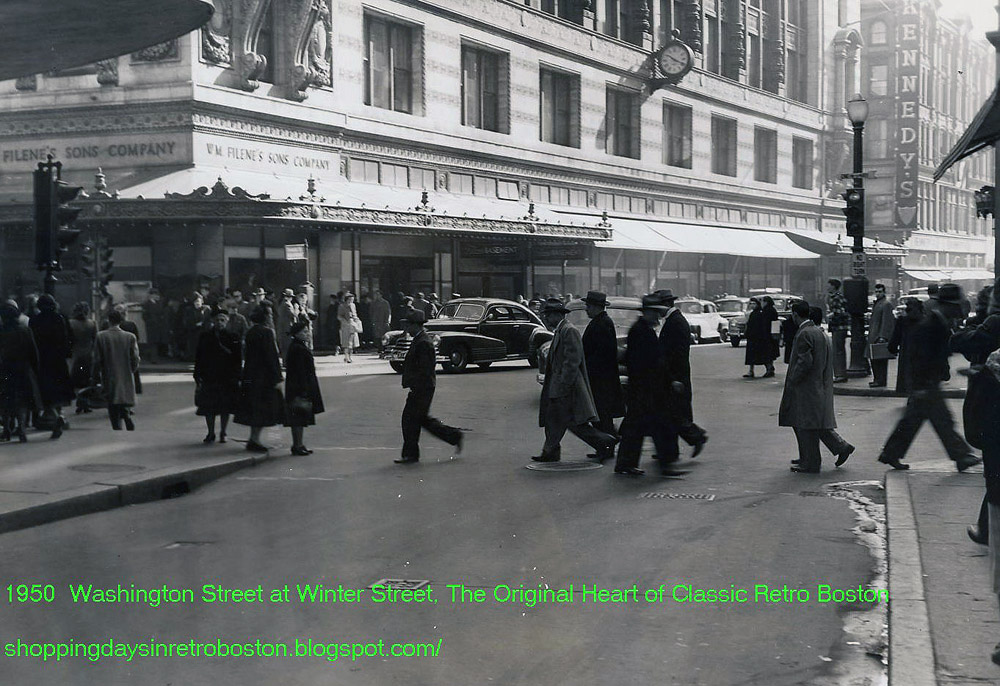 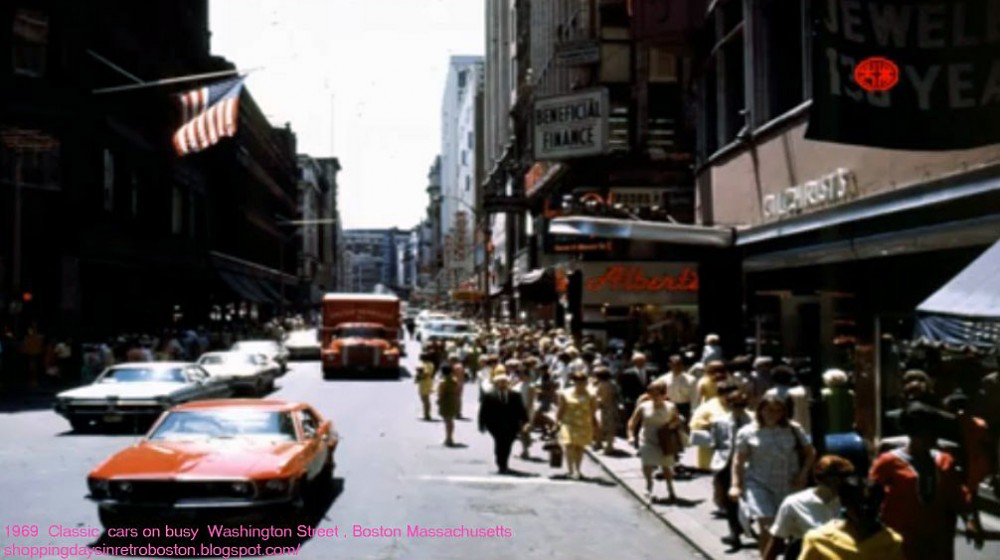 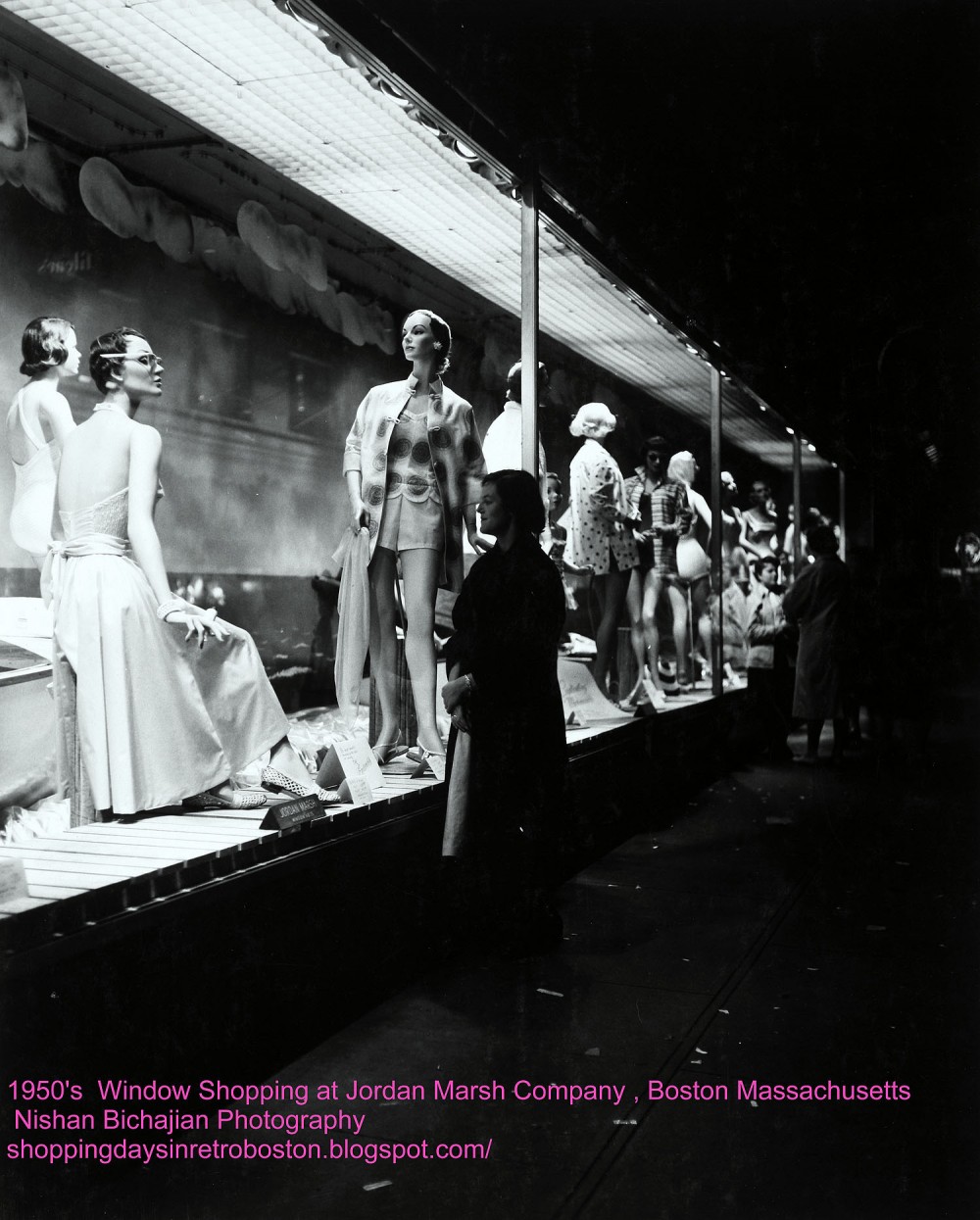 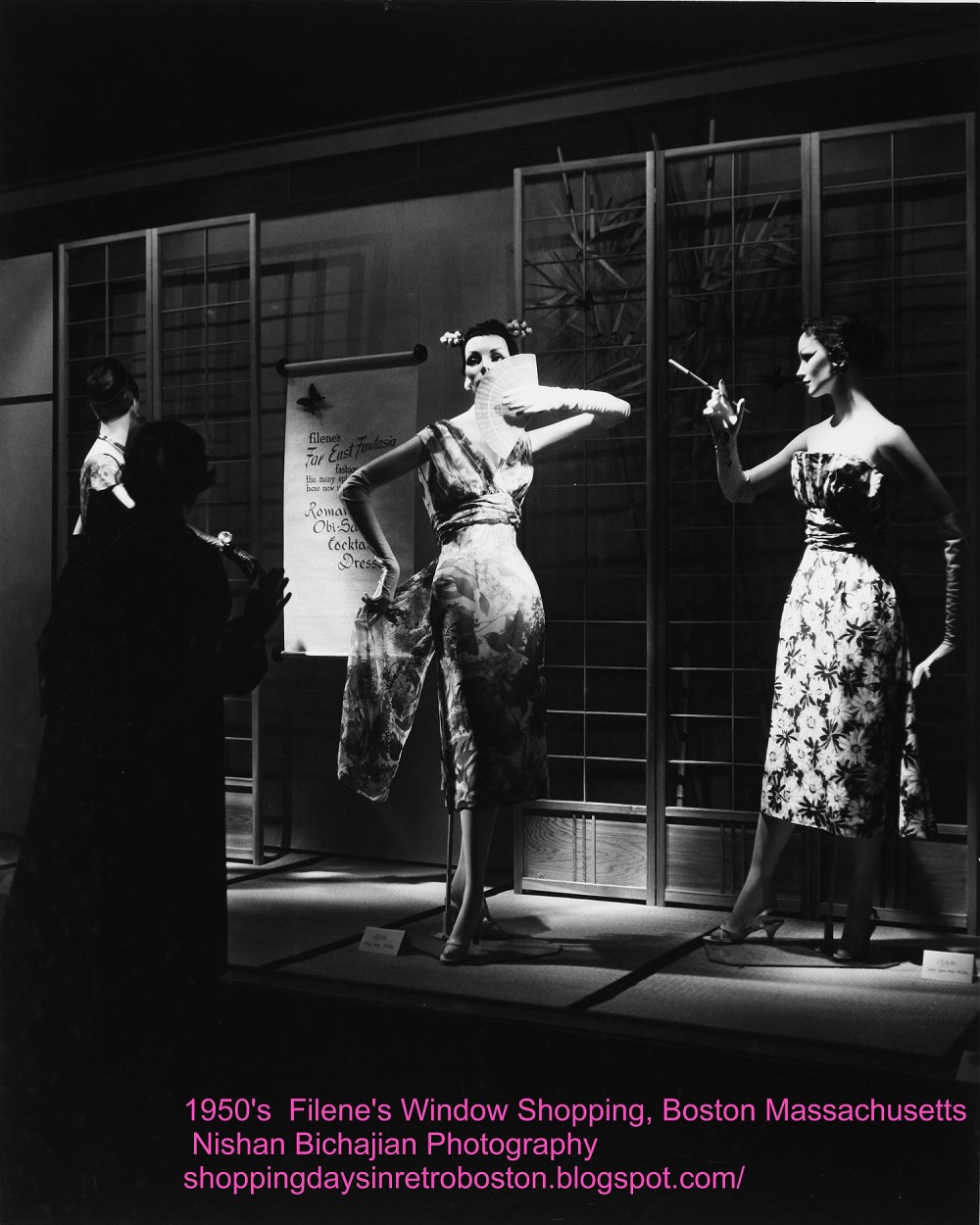 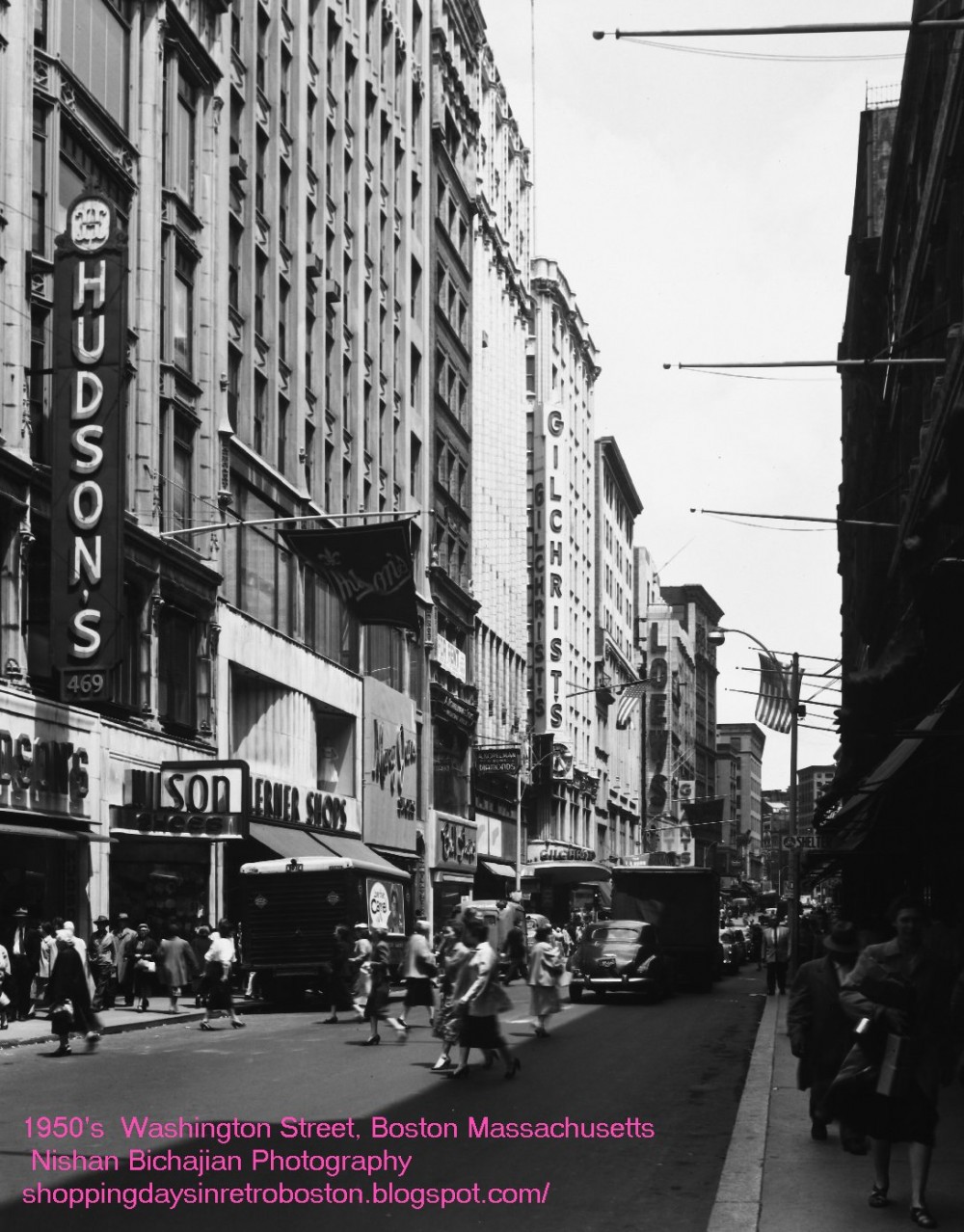 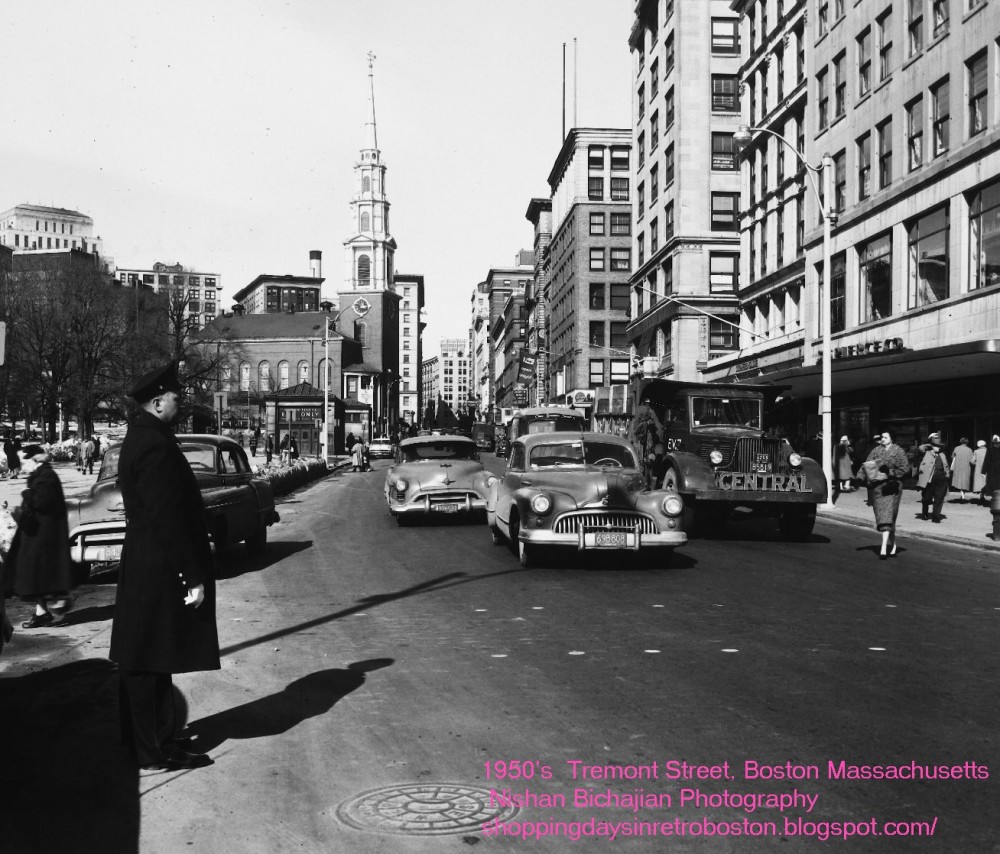 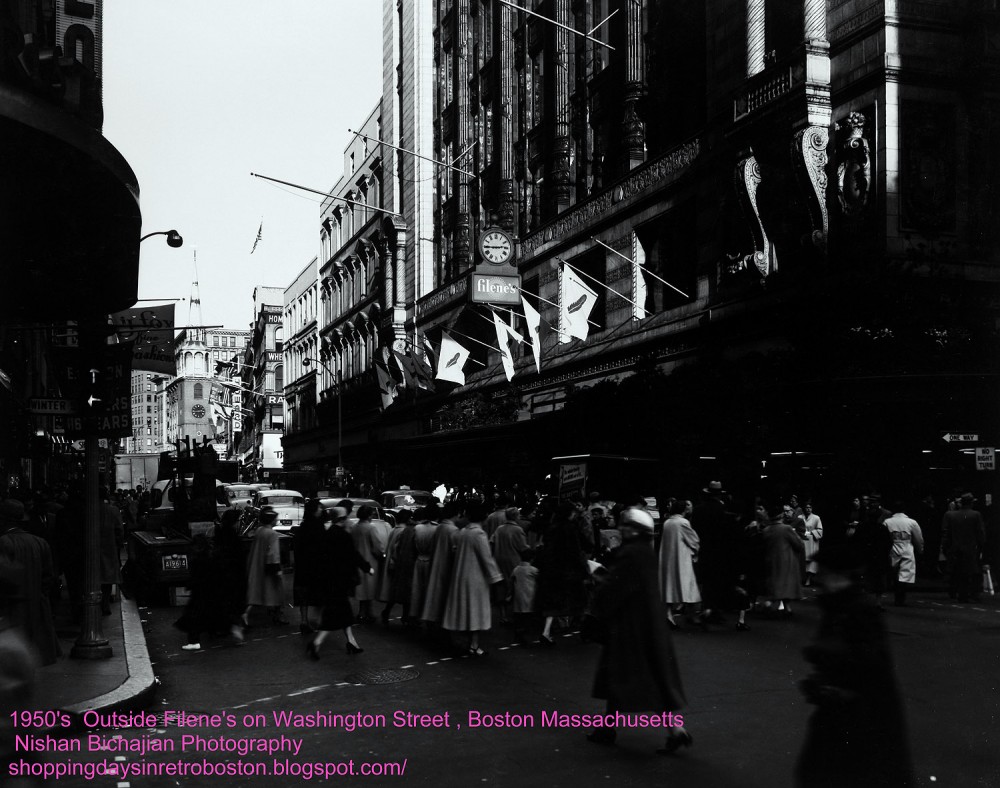