Väla Centrum is a shopping mall located in southern Sweden just outside of Helsingborg. This is the mall I grew up with. Many, many Friday evenings and Saturday afternoons were spent here as I took the car south going shopping with my family as a kid back in the late 1980s and early 1990s.

Väla Centrum was built in 1974 and was at its opening the largest shopping center in southern Sweden with 20 stores, two large anchor stores (Wessels and Obs!), a restaurant and a café. The photos displayed here were found on a postcard dating back the late 1970s. Pay attention to the cool interior details and color scheme, not forgetting the artsy bird cage and water feature underneath.

This mall truly took its inspiration from its American cousins that was built in the 1950s and 1960s. I have never seen any other mall in Sweden which have or have had a bird cage. I actually remembering seeing live Canaries in it until the late 1980s when they for one reason or another decided to remove them (probably deemed too small). The bird sculpture is named Fågeln (The bird) and was created by artist Bertil Valliens. It still stands there today, but at another location.

However, a large addition was added in 1997 making the mall almost unrecognizable and only years later they decided to remove the anchor stores and convert the space into store space for smaller shops. The only things that remind us now of its past are the groovy orange light fixtures seen in the photos, although now in a different color scheme and with other lamps – and the bird cage, of course.

On the outside you can still see the brown 1970s styled brick walls, although now mostly covered with store signs and added glass walls. There are rumors that they are going to extend the mall with another 41.000 square meters of new store space, removing the old courtyard with its fountains and thus making the mall fully unrecognizable.

If you have any memories or comments about this mall, let them be heard in the comments section please. 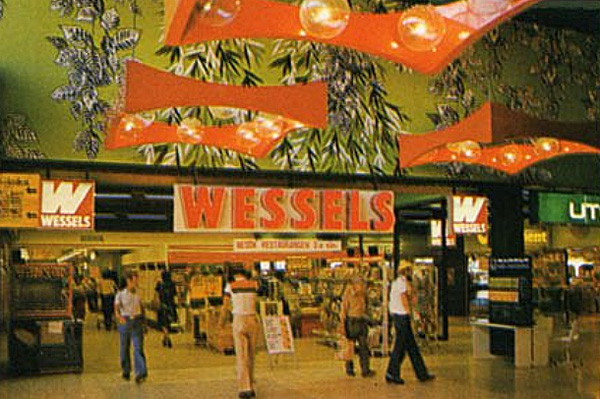 Above: Väla Centrum postcard from 1974