From age 7 to 30, I was Darrin two all the way. This kid was a macho, red-blooded Dick Sargent devotee. I couldn’t stand Darrin one, Dick York, with his big ears, greasy hair, and constant whining. No sir, Dick Sargent was my man – so much smoother and more willing to roll with the punches. But then I got married and something strange happened. There was a change within me. My life had a new beginning. I could still hear the birds sing, but it was a different song. I couldn’t put my finger on it, but my love of Darrin 2 started going sour and like Timothy Leary two generations ago, I turned on to Darrin 1, tuned in, and dropped out. I saw the light and I had been reborn.

What the “h” is he talking about, you say? Bewitched ran for eight seasons from 1964 to 1972 and featured married couple Samantha (Elizabeth Montgomery) and Darrin Stephens (Dick York/Dick Sargent). Samantha was a witch who fell in love with mortal Darrin and decided to stop using her powers to please her husband and live a normal life. They got married and had a daughter, Tabatha, and a son, Adam. This all sounds like a happy story until Samantha’s mother Endora (Agnes Moorehead), also a witch, is thrown into the mix and never leaves, creating mix-ups and mayhem aplenty.

Occurring through the next eight years is a constant battle between Endora and Darrin, with Endora winning more often than not. For additional comic relief, Samantha’s relatives and other assorted witches and warlocks pop in from time to time. The cast of ne’er-do-wells includes Dr. Bombay (Bernard Fox), Aunt Clara (Marion Lorne), housekeeper Esmeralda (Alice Ghostley) and Uncle Arthur (Paul Lynde). (If Paul Lynde and Alice Ghostley seem like siblings, it’s because Lynde’s act is based entirely on Ghostley’s “nervous Nellie” character he witnessed while they appeared on stage together in the 1950s, so they are essentially doing the same likeness.)

Samantha is a housewife who takes care of Tabatha while Darrin works as an advertising genius at the McMann & Tate advertising agency, always chasing after the elusive “McMann, Tate & Stephens” partnership promised to him by alcoholic boss Larry Tate (David White). While Darrin has his struggles, Samantha is constantly fending off nebbish neighbor Gladys Kravitz (Alice Pearce then Sandra Gould following Pearce’s death). In about every second or third episode, Gladys catches Samantha or Endora creating some kind of magic. Gladys runs home screaming to her husband Abner who makes a crack about her sanity and hands her some medicine while making veiled references to her many visits to psychiatrists.

Back to Dick vs. Dick. The first season of Bewitched is unlike any other. Whereas later seasons deal with wacky neighbors/relatives/fairy tale visitors, the debut year plays like a Hollywood romance of two souls falling in love while trying to make ends meet. As the seasons roll on, the number of wisecracks grow, the plots become more outlandish, and the world of witches wears down York’s Darrin Stephens. This is largely due to York’s constant pain from a back injury and an alleged addiction to painkillers. After five seasons, York called it quits and the job went to Dick Sargent. When season six debuted, no mention was made of the Darrin switch. Oddly enough, everyone fell into line treating Sargent like he was York – and it worked well. Although, the two Darrins had very different personalities and Sargent played Darrin a little meaner toward Endora and the other witches, which grew tiresome. But like Coke and Pepsi, everyone seems to like one Darrin and not the other.

Bewitched was produced by Montgomery’s husband, William Asher, who also directed many of the episodes. However, once their marriage began falling apart, Montgomery and Asher decided to end Bewitched, though the network wanted to sign them for another season.

The Flintstones-styled animated segment which opened each episode was created by Hanna-Barbera animators. The theme music is well known – even the legendary Peggy Lee sang a version of the theme with lyrics. 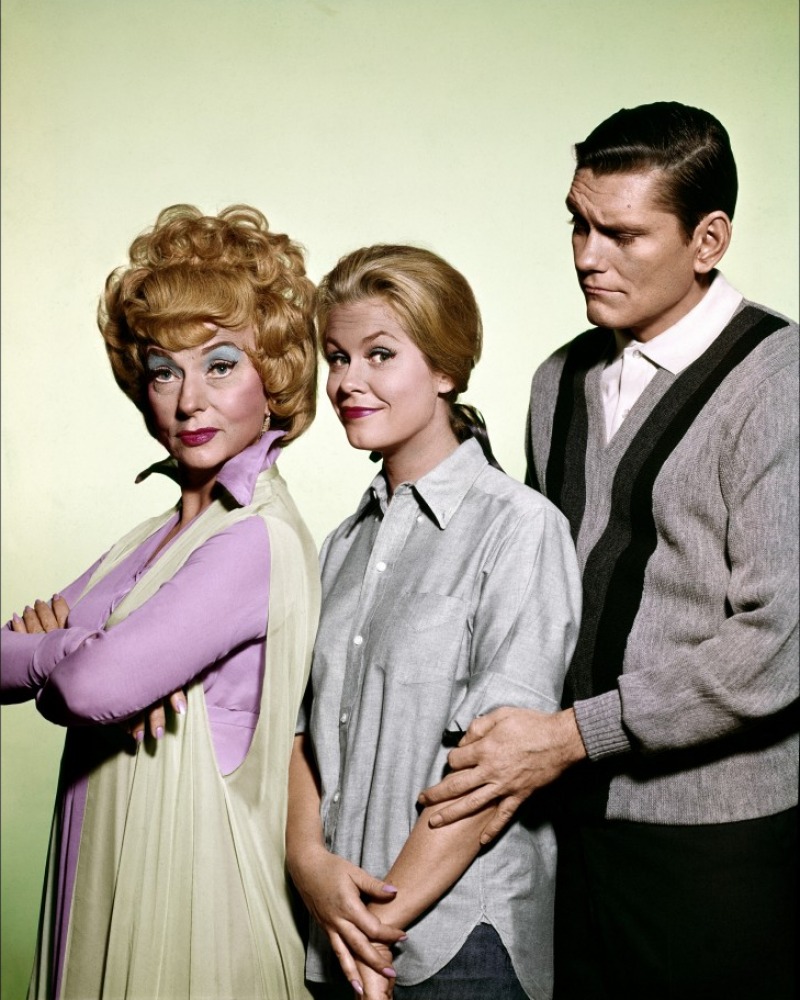