I’ll never forget that summer day in 1976 when I walked into my boyfriend’s pad and saw the poster of a blond in a red bathing suit pinned up on the wood paneling. “Really?” I asked. “Are you kidding me?” He grinned at me rather sheepishly and replied, “She’s really hot.” “Oh brother.” Rolling my eyes, I continued “I thought you were more mature than that!”

And besides, for an intellectual gal who immersed herself in the satires of Kurt Vonnegut and had training in method acting, superstar Farrah Fawcett of Charlie’s Angels appeared shallow and trite to me.

Never mind that I had attempted to emulate her blonde mane, though a few blow dryers had been thrown against the mirror in the process of getting these unruly curls to obey. Never mind that after years of wearing a bikini, I donned a one piece bathing suit once again. True, she was drop dead gorgeous and true her athletic image was an ideal model for the 70s woman, but there was just something more about Farrah that kept her in my peripheral vision as I waited, wishing more from her and believing that ultimately, she was an uncommon angel who was worthy of praise as an accomplished actress.

It is true that on the rare occurrences I watched the first season of “Charlie’s Angels,” Farrah was the most charismatic of the femme triumvirate. Kate and Jaclyn, beautiful as they were, just didn’t hold a candle to Farrah. Dubbed a “jiggle” show due to its trite dialogue, simple plots and mostly those “hot” women running around scantily clad, “Charlie’s Angels” was one of the most popular television shows on TV in the late 1970s. Farrah is quoted as saying “When the show was number three, I figured it was our acting. When it got to be number one, I decided it could only be because none of us wore a bra” (Charlie’s Timeless Angels: Women Who Transformed Television. Independent.co.uk. 2006-08-30). Like all true artists, Farrah wanted to be taken seriously and realized clearly the limitations of the show.

Despite a failed marriage with “Six Million Dollar Man” Lee Majors, several small roles in box office disappointments, and the media circus that continually surrounded her, she came into her own in 1984 when she portrayed a victim of domestic abuse. Based on a true story, “The Burning Bed” not only got Farrah nominated for an Emmy for her performance, it gave face to an issue that was generally ignored and deemed a private matter between husband and wife. Stripped of her make-up for the sake of realism and reduced to a common woman who suffered for herself and for her children, Farrah was remarkable.

Sadly, after her critical acclaim for this and other performances in the 80s, the talent Farrah possessed became overshadowed by highly publicized difficult relationships with men and in the last years of her life, a battle with cancer. Still, whenever I think of her, I see an iconic poster of blonde hair, a red bathing suit and a woman with true talent, an uncommon angel. 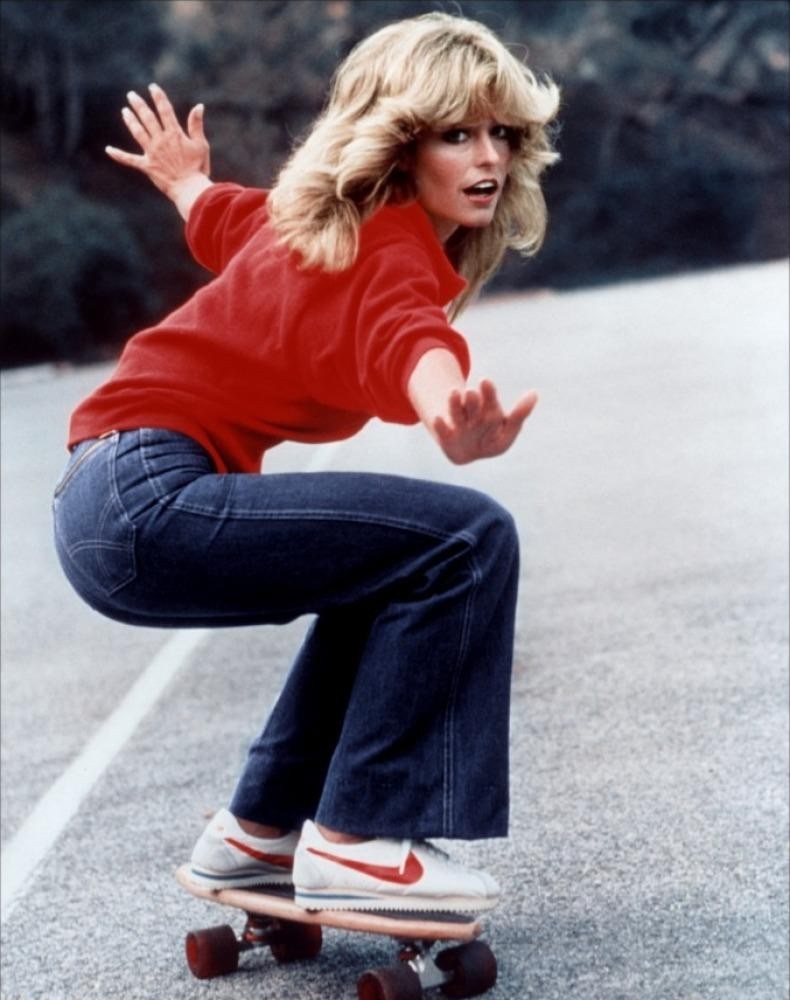 Above: Farrah Fawcett on a skateboard

Above: Farrah Fawcett in a red top

What Kind of Man is a Lounge Lothario